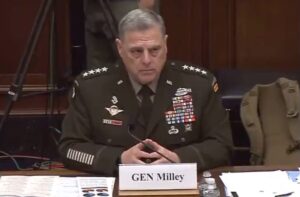 There’s something off-putting about watching politicians grill battle-hardened military men in search of what I consider to be cheap political points.

That’s what I saw today as three distinguished warriors sat before a Senate committee to be questioned about their role in the U.S. withdrawal from Afghanistan.

Let me be clear about a key point. I subscribe wholly to the notion that civilian authority must remain central to the conduct of our military policy. However, when I watch politicians seek to dress down men of valor, well … it turns me off.

Defense Secretary Lloyd Austin, a former Army four-star general, was one of the targets of the chumps serving on the Senate panel; so was Army Gen. Mark Milley, chairman of the Joint Chiefs of Staff; same for Marine Gen. Kenneth McKenzie, commanding officer of Central Command, which has coordinates all military activity in Afghanistan and the surrounding region.

Sen. Marsha Blackburn, a Tennessee Republican, sought to get Milley to admit whether he spoke to authors of books that have looked critically at the last days of the Donald Trump administration. Milley answered “yes” that he had spoken to the authors. Blackburn then asked whether he supported what they wrote. Milley said he hasn’t read any of the books.

That wasn’t good enough for Sen. Josh Hawley, a Missouri Republican, who then asked whether Milley was too busy being interviewed by the likes of Bob Woodward and Robert Costa to pay attention to the details of the Afghan War withdrawal. Hawley, ever the showman, then demanded that Milley and Austin resign their posts.

All three of these men have served their country with honor, valor and distinction. Milley has taken heat because of reporting in the book “Peril” that he gave his counterpart in China a heads up in the event of a potential attack by the United States in the waning days of the Trump administration. Good grief! He acted nobly as he sought to protect the United States against potential catastrophe!

Politics fuels everything these days. Hawley wants to run for president. He wants to make waves within the GOP so he takes this opportunity to question the integrity of genuine Americans heroes. 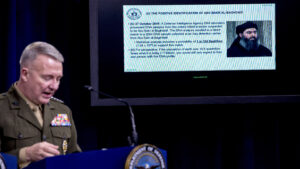 The head of U.S. Central Command, Marine Corps Gen. Frank McKenzie, has told us that Abu Bakr al-Baghdadi was “buried at sea” after Army Delta Force commandos completed their mission to take him out.

I guess I should accept the notion that the military personnel charged with disposing of the Islamic State founder’s remains did so with a modicum of respect. I mean, he didn’t show any respect to those victims he killed over his many years leading the hideous terrorist organization. Thus, he didn’t deserve the respect that Central Command reportedly gave his remains.

However, it was a prudent call to dispose of this individual’s corpse in the fashion that our military did. There would be no way in the world that we should bury him in the ground and create a shrine that would attract Islamic perverts to draw strength from being near his remains.

U.S. forces disposed of Osama bin Laden in the same manner after Navy SEALs killed him in May 2011. They hauled his remains out of the compound where the SEALs found him, took him to the USS Carl Vinson and then sent his body into the drink where it was likely consumed by undersea creatures.

I am going to presume that al-Baghdadi’s remains will meet the same fate. That’s fine with me.

Although it does anger me that these terrorist monsters likely got the respectful treatment they never accorded to their own victims. Whatever. They’re both dead. That’s the best part of how these stories have ended. 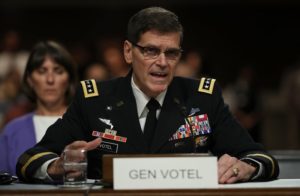 I guess none of us should be surprised to hear this bit of news from near the very top of the U.S. military chain of command.

Army Gen. Joseph Votel, commanding officer of the nation’s Central Command — which has authority over deployment of personnel in the Middle East — told Congress that Donald Trump didn’t consult with him before announcing his decision to withdraw our forces from Syria.

The president, though, did declare the Islamic State to be “defeated badly,” which was his seat-of-the-pants justification for leaving Syria and turning the fight over to . . . Syrian resistance forces.

The non-surprise comes in the form of those idiotic 2016 presidential campaign boasts that Trump made. He told us he was the smartest man in human history, that he knew the “best words,” had the “best mind,” would surround himself with the “best people” and, here’s my favorite, how he knows “more about ISIS than the generals do, believe me.”

The tragedy of it is that the Republican presidential candidate persuaded just enough voters living in just the right states to score an Electoral College victory to be elected the 45th president of the United States.

So he now gets to govern without consulting the “best people” who ought to include Gen. Votel, a combat Army veteran with vast knowledge of the Islamic State and the threat it still poses in the region and around the world.

According to Time.com: When Trump announced his decision to pullout on Dec. 19, it sent shock waves through Washington and the rest of the world. “Our boys, our young women, our men, they’re all coming back and they’re coming back now. We won.”

But did we? ISIS has claimed responsibility for terror attacks after the announcement, suggesting to many of us that the Sunni Muslim terror outfit isn’t “defeated.”

However, Donald Trump is wired to be all-knowing all the time, or so he would have us believe.

Except that I don’t believe a single word that flies out of his mouth. 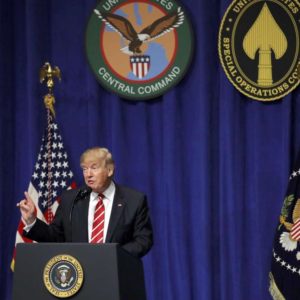 Donald “Smart Person” Trump has suggested that the media are covering up terrorist attacks that have occurred against innocent victims. The president went to Central Command headquarters today ostensibly to express his support for our fighting men and women.

So … what does this guy do? He tosses yet another lie onto the firestorm he is trying to stoke.

What’s more, he has actually impugned the patriotism and loyalty of the people who report the news to the public.

Trump — as is his modus operandi — cited not a shred of evidence to back up his allegation. He just said it. Boom! That’s it.

According to CBS News: “The president began talking about how ‘radical Islamic terrorists are determined to strike our homeland’ as they did on 9/11, in the Boston bombings and in San Bernardino. He said it’s also happening ‘all over Europe’ like in Paris and Nice.

“’It’s gotten to a point where it’s not even being reported. In many cases, the very, very dishonest press doesn’t want to report it. They have their reasons and you understand that,’ Mr. Trump said.”

It’s not even being reported?

Their reasons? I’m all ears, Mr. President. I am waiting with bated breath to know what those reasons might be.

Is it because the media are actually terrorist sympathizers? Do they want the bad guys to succeed? Do they actually favor the death and misery being inflicted on innocent victims?

What in the name of all that is holy is this clown suggesting?