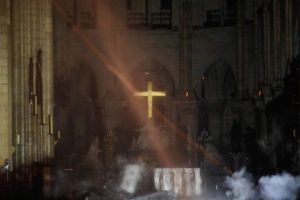 There’s symmetry to be found in the tragedy that struck the Cathedral of Notre Dame in the middle of Paris, France.

Think of it. The fire broke out during Holy Week, which Christians celebrate Easter, the most joyous holiday on their calendar. Easter symbolizes the emergence from darkness, brought on by the death of Jesus Christ.

The holiday celebrates the resurrection of Jesus. Christians sing joyful hymns in church and welcome the rebirth brought on by the spring season.

The Cathedral of Notre Dame was damaged heavily by fire. French government officials vow to rebuild the iconic structure.

What many of us find fascinating is the survival of the crucifix in the cathedral’s sanctuary. Pictures of it seem to glow amid the rubble left by the blaze.

So the rebuilding will commence . . . eventually. French fire investigators need to determine the cause of the fire. What is left of the structure needs to be assessed and it needs to be determined how much of it can be saved. Initial reports indicate the structure is sound enough to withstand reconstruction.

How much better can it get than that, albeit given the tragic fire that has scarred this iconic holy building?

The world will await the resurrection of the heavily damaged Cathedral of Notre Dame. The more I think about it, the symbolism of the church’s pending rebirth juxtaposed with the timing of the event that brought so much misery could hardly be more perfect. 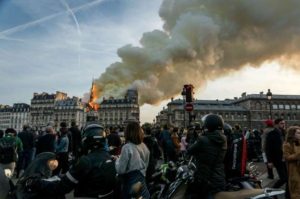 The world is still recovering from the shock of the fire that ravaged the Cathedral of Notre Dame in the center of Paris.

The iconic church’s steeple collapsed. Its roof caved in. The interior was engulfed in flames. That’s the bad news.

However, the twin towers are still standing. The sanctuary’s crucifix is, too. Many of the church’s most cherished artifacts have been saved from the inferno; one of them is the crown of thorns believed to have been worn by Jesus Christ on the day he was crucified.

There’s more hope emerging. French billionaires have pledged as much as $300 million to restore, repair and revive the iconic symbol of the Catholic Church.

That the fire would erupt during Holy Week only adds to the heartbreak as Christians worldwide prepare to celebrate the joyous Easter holiday. Thus, the Notre Dame cathedral usually stands as an iconic symbol of the joy that Christians feel as they celebrate Jesus’s resurrection. This year, though, the cathedral — nearly destroyed by a fire believed to have started because of work being done on the 850-year-old structure — stands as a reminder of hope in another fashion.

It stands as a testament to the will of people to rebuild a cherished symbol.

I feel the need, too, to salute the heroic effort of the firefighters who faced down the flames, controlled the fire and somehow managed to prevent a horrific catastrophe from becoming even more heartbreaking.

French President Emmanuel Macron vows to “rebuild” the Cathedral of Notre Dame. It would be foolhardy to bet against it.

Fire has swept through the Cathedral of Notre Dame, the iconic Paris church and an overarching symbol for the Catholic Church.

The bell towers reportedly are safe. The spire has collapsed. Reports seem conflicted. Is the cathedral a total loss?

I know what we all are thinking now as French firefighters battle this blaze: Is this the act of a terrorist? No such organization has claimed responsibility as I write this brief post. I pray none will surface. If it’s a bogus claim from some faker, I trust French intelligence officials will know.

I’ve not been to Paris. I have not seen this iconic structure. Those I know who have seen have come away enriched beyond measure just being in the presence of this holy site.

Thus, the world should mourn what is unfolding in Paris at this moment.

My heart is broken.