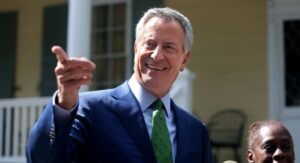 Bill de Blasio should have seen it from the beginning.

New York City residents don’t think much of him. Yet the mayor decided he wanted an upgrade, to become the next president of the United States.

De Blasio never got to 2 percent in any national poll among Democratic candidates for president. So, today he pulled out. He’s done.

My hope is that de Blasio’s decision will trigger more withdrawals from the lengthy list of never-will-win Democrats seeking to win their party’s 2020 presidential nomination.

De Blasio didn’t qualify for the latest Democratic joint appearance in Houston, which I suppose was the last straw. The hard truth for the mayor was that a man who couldn’t engender broad support within his own city wasn’t likely to do any better on the national stage.

I reckon the still monstrous Democratic field has more candidates who will pack it in. They’ll leave this race to the half-dozen or so who actually have a chance in hell of being nominated and then running against the huckster in chief, Donald Trump.

Call it a campaign, folks. Follow the NYC mayor’s lead and go home.

Normally, I disagree with the New York Post’s editorial policy.

The Post has asked a legitimate question: Why won’t there be demonstrations supporting a young New York City police officer who has been put into a medically induced coma after being shot while on duty?

An ex-con with a history of violent behavior is in custody for the shooting.

Since we’ve been focusing lately on the incidents involving white officers harming black suspects, it’s fair to note that the suspect in this incident is black and the officer is white.

Officer Brian Moore is the fifth New York City officer to be shot in the line of duty since December. The Post takes appropriate note of the risk that these officers face every single day they report for duty. Moore clings to life now because of someone’s callous disregard for civil order.

NYC Mayor Bill de Blasio has expressed his support for Moore’s family and vows to be there for them as they pray for the young officer. He took some undeserved criticism by the police union in the wake of earlier tragedies involving officers and suspects in their custody; officers turned their backs on the mayor as he spoke at the funerals of two officers ambushed in Brooklyn. That should not have happened.

Brian Moore devotes his life to protecting others.

He and the other officers, as the Post states, “need the full, unqualified support of every New Yorker. Heaven knows they’ve earned it.”

And once again the officer’s comrades turned their back on the mayor.

Officer Wenjian Liu was laid to rest. His family flew here from China to honor their loved one. His new bride now must carry on without her man.

Liu was shot to death the other day, along with Officer Rafael Ramos, by a gunman seeking revenge for a grand jury declining to indict another officer in the choking death of a black man in Staten Island.

De Blasio has said about all he can say to honor the two slain officers. He’s offered sympathy, support, words of encouragement and high praise. And yet again — as they did at Officer Ramos’s funeral — the officers turned their back on the mayor.

They have dishonored themselves and spit in the face of their comrade’s loved ones.

The New York Police Department has committed a disgraceful act of showmanship in the most inappropriate context imaginable.

It occurred during the funeral of one of its fallen comrades, Officer Rafael Ramos. And it happened when Mayor Bill de Blasio rose to speak in honor of the officer’s memory.

As the New York Times noted in a scathing — and spot on — editorial: “Mr. de Blasio isn’t going to say it, but somebody has to: With these acts of passive-aggressive contempt and self-pity, many New York police officers, led by their union, are squandering the department’s credibility, defacing its reputation, shredding its hard-earned respect. They have taken the most grave and solemn of civic moments — a funeral of a fallen colleague — and hijacked it for their own petty look-at-us gesture. In doing so, they also turned their backs on Mr. Ramos’s widow and her two young sons, and others in that grief-struck family.

“These are disgraceful acts, which will be compounded if anyone repeats the stunt at Officer Liu’s funeral on Sunday.”

The officers turned their backs on the mayor as he spoke about the officer’s heroism and his service to the city all of those officers have sworn to protect. He and Officer Wenjian Liu were gunned down the other day by someone angry over a Staten Island grand jury declining to indict an officer in the choking death of Eric Garner. The shooter then killed himself.

Why are the officers angry? They contend the mayor hasn’t done enough to protect the police department from this kind of senseless violence.

So, to make their point, they engage in a cheap stunt at a solemn event.

The mayor has stated every possible way he knows how that he supports the police department. He has spoken in honor of the officers who put their lives on the line every single day they go to work. He has heaped enormous praise on those who have fallen and has pledged his unwavering support for those who remain on duty.

This is the response he gets from the men and women of the NYPD?

The term “disgraceful” almost doesn’t seem adequate to describe what they have done not just to the mayor but to the families of the fallen officers.

Eliot Spitzer’s year — which was a rocky journey to begin with — has ended with a crash.

The former New York governor and his wife, Silda, are divorcing. OK, so that’s not so uncommon these days. In Spitzer’s case, though, it’s a rather public parting of the ways.

Spitzer was governor of New York until 2008 when he resigned after admitting to fooling around with hookers. Silda stood stone-faced by his side when he quit. Then he had a brief fling as a CNN commentator. The network dumped him when his ratings tanked. This year, Spitzer ran for New York City comptroller and lost that race, too.

Then reports began to surface that Spitzer had struck up a relationship with an aide to New York Mayor-elect Bill de Blasio. Sometime during all of this, Silda and Eliot separated and were living apart.

Christmas Eve wasn’t full of much cheer for the former New York power couple as they announced their pending divorce.

I don’t usually spend too much time hashing this kind of thing over, but Spitzer’s inability to bow out of the limelight after the hooker blowup makes him an easy target.

He should have just called it quits back then, retreated into private life and sought to restore his marriage behind closed doors. Spitzer didn’t do that. He continued to thrust himself into the spotlight, apparently forgetting that in this age of prying eyes and ears everywhere no one can escape public scrutiny.