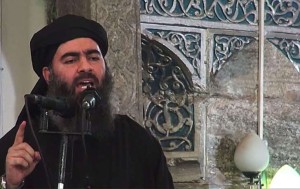 Who is this guy? He is the leader of the Islamic State. He heads the world’s most formidable terrorist organization.

What if we get him? Will it mean the end of the organization. Probably not by itself, but it would cripple the Islamic State in a way that all the bombs and missiles we’re dropping on the terrorists.

This is a big deal at many levels.

According to Bloomberg News Service: “Eliminating Baghdadi is seen as a particularly important goal, the official said, because he holds a unique role in being able to inspire and organize extremists beyond the territory held by the group. While declining to compare the effort to the operation that led to the killing of al-Qaeda leader Osama bin Laden in 2011, the official said the U.S. has a proven track record of finding a top target once it sets its sights.”

President Obama and Defense Secretary Ash Carter announced recently the deployment of a special operations team that is set up to help Kurdish and Iraqi forces fighting ISIS units. The team is expected to deploy teams acting on intelligence gathered by CIA operatives, the National Security Agency, the FBI, Navy SEALs and Army Delta Force commandos.

These folks all are quite good at what we ask them to do.

Which is to hunt down and eliminate bad guys.