One of the discredited public policy pronouncements coming from the far-left wing of the political spectrum has been the “defund the police” calls emanating from the deaths of Black men at the hands of rogue cops.

Beto O’Rourke, the Democratic candidate for Texas governor, was one of those who spoke about how delighted he was to see the “defund the police” movement gathering a head of steam.

I want O’Rourke, who I happen to support in his quest to become Texas governor, to explain whether he still believes in the defund the cops movement. Or has he moved on?

Republican Gov. Greg Abbott is beating Beto up on that notion, which might be contributing to his continued strong showing in the polls leading up to the Election Day.

The two men are going to debate later today in the Rio Grande Valley. It’ll be their only joint appearance prior to the balloting in November.

I want to hear some specifics from O’Rourke on the defund police idea that he once praised. More to the point: Has his view “evolved”? 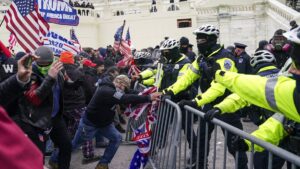 A Facebook meme showed up today on my news feed that posed an interesting question.

It came in the form of a fake conversation between Wally and Beaver Cleaver. It goes something like this: Gee Wally, if Republicans think that Antifa, Black Lives Matter and assorted communists started the riot on Jan. 6 … why don’t they want to investigate it?

Hmmm. You know the answer to that one. I’ll offer my own view.

It’s because they don’t believe the lie they are telling. The know that BLM, Antifa and other lefty-leaning groups aren’t responsible for the attack on our democratic process. They know in what passes for their hearts that the attack was done at the behest of the moron who lost the 2020 presidential election, but who cannot to this very day declare that he lost fair and square.

We are witnessing the cult of personality at work. It has declared its fealty to a man and thrown aside any pretense of loyalty and adherence to the Constitution of the United States. 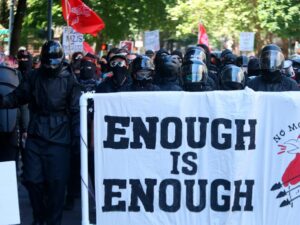 As I watch and listen to the contemporary political debate, I am struck by the profound irony I see and hear almost daily.

Here’s what I mean.

I listen to those on the far right fringes of our nation’s political spectrum proclaim their “patriotism,” their “love of country” and their devotion to the Constitution. Then I see the occasional image of these “patriots” standing under a Confederate flag. Or they lambaste the movement known as “Antifa,” which — as you might know — is a sort of short-hand for “anti-fascist.”

The irony? Well, the first ironic notion is obvious, given that the Confederacy stands as the nation’s most profound enemy of the state. The Confederate States of American seceded from the Union and went to war to protect the institution of slavery within those states.

In recent times, of course, many of us has awakened to what the Confederacy really represented: treason against the United States of America. Statues of Confederate soldiers have come down. Americans have rioted to protest their removal. A president of the United States tried to make excuses for their riotous behavior by referring to “fine people … on both sides” of a riot that included Klansmen and Nazis.

That dovetails into the second profound irony of this real-time debate. Antifa has become a four-letter word. It is used in some circles as an epithet meant to demonize those who speak out against police brutality or seek justice for those who have been mistreated by rogue cops.

The root of the term Antifa, though, is what brings this irony into sharp focus for me. Let us never forget that The Greatest Generation of Americans went to war against fascism. The German Nazis who, along with their Italian partners, sought to subjugate Europe under the heavy hand of fascism. They were joined by their tyrants in Japan, who dragged this country into the world’s bloodiest war. My own father was one of those young Americans who left the comforts of their home and went to war against the fascists.

Yes, Dad was an Antifa member.

I simply cannot let this irony go without offering this comment on its hideous nature in this current political debate.

Who in the name of gullible listeners does Ron Johnson think he’s kidding?

The Wisconsin Republican U.S. senator is now trying to take back what he told the radio talk show host the other day about the insurrection of the Sixth of January on Capitol Hill.

I am certain beyond a doubt that he said that the crowd that stormed Capitol Building would “never” do anything to break the law, that they have “great respect” for law enforcement and that had the rioters belonged to Black Lives Matter or Antifa that he would have “been concerned.”

Now the Cheesehead nut job says the media twisted his remarks. That his statements were taken out of context. Huh?

Respect for law and order, for the police? What about the cops who were injured by the rioters/terrorists? Or the young Capitol Police officer who died from his injuries?

I heard what Johnson said. I heard all of it. I know what I heard.

Ron Johnson said it. He needs to own it. Oh, and while he’s at it he ought to resign from the U.S. Senate.

A friend of mine noted on social media that this bit of news won’t convince anyone’s crazy uncle, but the FBI has concluded something critical about the riot that overwhelmed Capitol Hill on Wednesday.

It is that the Antifa movement was not involved in the mob that stormed the nation’s Capitol Building. The riot killed five people, inflicted heavy damage on the structure itself and sent members of both congressional chambers — as well as Vice President Mike Pence — scrambling for cover to protect them against the mob.

Antifa is that leftist conglomeration of Americans who protest fascism in its various forms. Some right wingers have suggested that Antifa sympathizers were disguised as MAGA-hatted rioters.

The FBI has said “no,” that isn’t  the case. The feds have found no evidence of any leftist infiltration of the pro-Donald Trump mob that invaded the Capitol Building, where Congress was conducting its pro forma duty of ratifying Joe Biden’s election as president of the United States.

I agree with my friend that the FBI findings won’t persuade the frothing Trump faithful. It just needs to be stated that the nation’s top law enforcement agency has put the lie to, um, another lie. 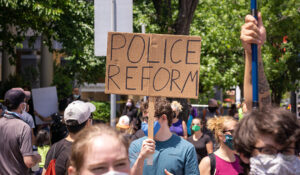 Facebook has done the absolutely correct thing by pulling down a Donald Trump re-election campaign ad that displays a symbol used by Nazis to designate political prisoners.

I cannot wait for the yammering, whining and whimpering to start now from the Trump team, complaining that Facebook is being “politically correct.”

The symbol is a red inverted triangle the Nazis would use to identify individuals bound for, um, death camps and other forms of political imprisonment. Indeed, it is reprehensible in the extreme for such symbols to show up anywhere these days, let alone coming from a campaign for a president of the United States seeking re-election.

As the Washington Post reported: A red inverted triangle was first used in the 1930s to identify Communists, and was applied as well to Social Democrats, liberals, Freemasons and other members of opposition parties. The badge forced on Jewish political prisoners, by contrast, featured a yellow triangle overlaid by a red triangle.

What in the name of common decency is the Trump team trying to convey?

They either are ignorant, arrogant or simply stupid.

Hey, I’ll go with all of the above.

Trump has decided to go after antifa, the loosely based collection of protesters often identified with far-left movements. Indeed, the word “antifa” is shorthand for “anti-fascist,” which is precisely the kind of movement that this modern-day group would oppose … and which was the focal point of Adolf Hitler’s rise to power in Germany.

As for the ad it took down, well, it speaks volumes about Donald John Trump.

BLOGGER’S NOTE: This post was published originally on KETR.org, the website for KETR-FM, based out of Texas A&M-Commerce.

“Antifa” as become a four-letter word in some circles around the nation.

It is meant as a sort of shorthand for a group that opposes fascism, as in “anti-fascism.” Of course, it has morphed into a more militant sort of operation. Of late, though, it has been blamed for fanning the flames of discontent and discord on our city’s streets in the wake of George Floyd’s tragic killing in late May by Minneapolis police officers who were arresting him for – get this! – allegedly passing a counterfeit $20 bill.

National Public Radio, though, has done some research on the conspiracy charges being leveled against “Antifa” and has found no credible evidence that the organization has sought to energize protesters, turning them into vandals, looters and rioters.

According to NPR: U.S. Attorney General William Barr has repeatedly blamed anti-fascist activists for the violence that has erupted during demonstrations over George Floyd’s death, but federal court records show no sign of so-called antifa links so far in cases brought by the Justice Department.

NPR has reviewed court documents of 51 individuals facing federal charges in connection with the unrest. As of Tuesday morning, none is alleged to have links to the antifa movement.

Of the cases brought so far, 20 involve allegations related to arson; 16 involve the illegal possession of a firearm, more often than not by a felon; another eight people face charges related to inciting a riot or civil disorder.

That doesn’t sound like a widespread Antifa conspiracy to me.

But it continues to resonate in many quarters around the country. I prefer to think of the protests as a legitimate reaction to an appalling demonstration in Minneapolis of police arrogance. We have heard the concerns expressed already too many times in other cities and towns about cops treating African-American detainees differently than they treat others. What the nation has seen via video recording is precisely the kind of policing that protesters insist must stop.

I want to add a brief post-script to all of this.

North and Northeast Texas have seen their share of demonstrations against the horror that revealed itself in the Twin Cities. There have been “unification” rallies in Princeton, Farmersville and Greenville. People have marched in Greenville, calling for an end to racism and brutal conduct. I attended a rally in Princeton where protesters didn’t march, but instead observed an 8 minute, 46 second moment of silence in George Floyd’s memory.

I am proud that we have kept our composure while lodging this legitimate redress of government policies. 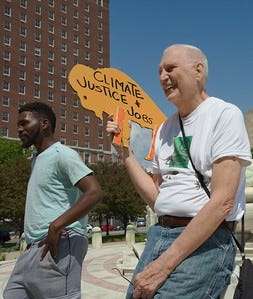 You no doubt have seen the video.

Martin Gugino, a 75-year-old protester, approached a phalanx of Buffalo, N.Y., police officers armed with shields and assorted riot gear. The cops pushed him to the ground. Gugino hit his head hard on the pavement and blood began pouring out of his ear.

The police walked on by. Someone finally summoned medical help. Gugino was taken to the hospital, where he was listed in serious but stable condition.

It turns out Gugino suffered a brain injury. He needs physical therapy.

What, though, did the president say about this fellow? The Conspiracy Theorist in Chief suggested that Gugino faked his fall, that his tumble onto the pavement was exaggerated. Donald Trump called him an Antifa “provocateur.”

Let’s just say that the only provocateur in this instance is Donald Trump, who is provoking more anger, more distrust of those who are protesting police brutality … which was the cause of the Buffalo march in the first place.

Get well, Mr. Gugino. As for Donald John Trump, well … I am just hoping he is in the final throes of his disgraceful tenure in the nation’s highest office.