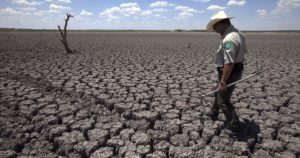 I’m going to have to do the virtually unheard of thing later today: At not quite the halfway point in August, I’m going to empty our rain gauge, which is full of water.

We’ve gotten slightly more than 5 inches of rain at our humble abode in southwest Amarillo so far this month. My wife and I empty it at the end of each month before waiting for more rainfall. This month has been a soaker, man!

The National Weather Service station near Rick Husband Amarillo International Airport reports that Amarillo has received 19 inches of rain year to date; that’s 5 inches more than normal and 6 inches more than we had at this time in 2016.

So, put another way, we’ve achieved just about our average annual amount of precipitation — and we still have more than four months to go in this calendar year.

All of this begs the question: Is the drought over?

I’ve heard it said about the crippling drought the High Plains endured in 2011 that it would take an epic amount of rain to bring us officially out of drought status. I cannot remember the specifics, but given that the Ogallala Aquifer takes so very long to recharge given its depth that the rain has to fall in virtually biblical amounts to break the drought.

I’m going to continue believing that and monitor my water use accordingly.

We don’t have one of those automated irrigation systems in our yard. So that’s not a particular issue for my wife and me. We serviced our outdoor faucets during the depths of the drought, so we’re good there. We do things in the kitchen such as turn on the sink faucet sparingly when washing dishes. We remodeled one of our bathrooms a couple of years ago and had one of those “gravity flush” toilets installed, which saves water.

We’re not paragons environmental purity. I don’t intend to portray us as such. Water preservation, though, remains on the top of my mind’s awareness, even when it’s pouring out of the sky.

I keep thinking, too, about that fabulous PBS documentary “The Dust Bowl” that aired not long ago. It told the terrible, horrifying story of how prolonged drought and reckless farming techniques formed a sort of “perfect storm” that created what has been called the nation’s “worst manmade environmental catastrophe.” The Texas and Oklahoma panhandles were in the bullseye of that hideous event.

Our farming techniques have improved since the 1930s. Yes, we can control how we take care of our land. The return of the kind of Dust Bowl-era drought, though, is far beyond our meager effort to dictate to Mother Nature.

Let’s keep that in mind — even as we welcome the rain that keeps drenching us.

Allow me this admission.

Sometimes — maybe more often than I care to admit — I’m a bit slow on the uptake when it involves certain elements of science.

I’m not a scientist. Or a mathematician. Or an accountant. Numbers and scientific theories boggle me.

So it is with that caveat that I suggest that I am beginning to accept the notion that pumping water out of Lake Meredith to 11 cities throughout the Panhandle actually saves surface water that collects in the lake.

The Canadian River Municipal Water Authority is starting to pump water out of the lake in the wake of recent rainfall that has continued to restore the lake levels to something far greater than puddle designation.

Kent Satterwhite, general manager of CRMWA, said: “Everything we pump out of the lake is one gallon less than we pump out of the (Ogallala) aquifer.” He said it is “really important. The aquifer as you use it, it’s gone. It recharges to some slight degree … So it’s really important to try to preserve it and that’s why the lake is here to take some of the heat off the aquifer.”

Lake Meredith’s levels have risen fairly dramatically in recent days. It’s nearly at 50 feet, which is far greater than the 26 feet it measured in 2013. OK, so the lake is now about halfway toward its historic high of 100-plus feet set back in the early 1970s.

I guess I’m trying to express some appreciation of the knowledge that water managers must have to monitor this priceless resource.

The region depends on it at almost every level imaginable. There must be some faith placed in the individuals charged with ensuring we keep it as close to forever as we can. 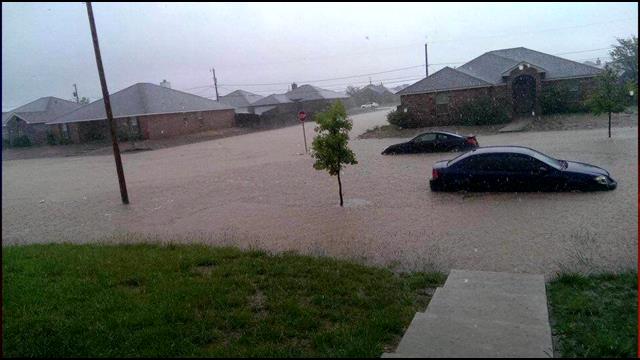 Is it just me, or are others out there wondering about the quality of our storm-drain system in Amarillo?

My wife and I have lived here now for slightly more than 20 years. My memory at times is a bit foggy, but I’m pretty sure this is the worst rain event we’ve seen since we moved here from the Gulf Coast — where we used to get a lot of rain in a very short period of time.

The city has its hands full this Memorial Day weekend. We just came back from a grocery run and discovered water had flooded from McDonald Lake, across Coulter. Motor vehicles were stalled as motorists tried to slosh their way through the muddy water.

Us? We were OK, as we drove our big ol’ 3/4-ton truck through it without any difficulty.

In our two-decades plus here, this is the first time we’ve seen that much water across Coulter.

The other traditional trouble spots I’m quite certain are disasters this morning.

Well, once City Hall gets through this situation, I’m hoping the city’s senior administrative staff sits down and has a serious after-action meeting to discuss ways to improve matters for the next big rain event.

It also might be good for City Manager Jarrett Atkinson and Mayor Paul Harpole to conduct a press conference to explain — in detail — what happened out there and whether the city has any plans afoot to try to correct it. You know, things like drainage construction or perhaps fine-tuning its emergency response — if it’s needed — to help folks cope with what this most unusual weather event.

It’s been a long time coming. Most of us are quite grateful for the moisture (a term that seems quaint, given the volume of water that’s fallen from the sky).

Residents of a modern American city, though, shouldn’t have to worry about flooding every time it pours.

Or is this what we can expect — all the time?