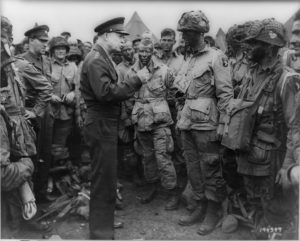 Right then and right there, with those words, the order went out from the supreme commander of Allied forces in Europe.

The invasion of Europe was on.

General of the U.S. Army Dwight D. Eisenhower faced a terrible dilemma. The weather over the English Channel had been horrible. The invasion of France had been delayed once already. Hundreds of thousands of men had assembled and prepared in Great Britain for Operation Overlord.

Ike then caught a bit of a break. The weather was going to cooperate — more or less — on June 6, 1944. That’s when he decided to issue the order.

The men set out in ships. They boarded landing craft and hit the French coastline along five beachheads. American and British soldiers stormed four of them; Canadians stormed the fifth one.

Eisenhower had drafted two statements in preparation for that event, one to proclaim victory on the beach, the other to take full responsibility in case it went badly. He didn’t have to deliver the latter statement.

It has become fashionable in the present day to invoke Ike’s memory as we discuss the merits of the individuals seeking the U.S. presidency. Those who defend the current Republican presumptive nominee’s lack of government experience often cite Eisenhower’s own lack of such qualifications when he ran for president in 1952.

No, he didn’t have that kind of experience. All he did, though, was save the world from tyranny.

Eight years after saying simply, “OK. We’ll go,” the presidency became his for the taking.

So it was on this day 72 years ago that thousands upon thousands of young men followed their commander’s order.

May God bless them all.

The object of this worldwide scorn once again is the Islamic State, which reportedly beheaded a captured Japanese journalist supposedly in “retaliation” for Japan’s assistance in the international fight against these terrorist monsters.

Kenji Goto was murdered because Japan has been sending food and medical supplies to assist the international coalition and to lend aid to those who are suffering from the violence in Iraq and Syria, where ISIL is conducting its reign of terror and destruction.

Japan’s hands are tied in this fight, given that its government is sworn by the treaty it signed at the end of World War II that prohibits it from deploying armed forces overseas. Japan maintains a stout military for national defense purposes only. And that’s an understandable caveat that the Allies placed on Japan, given its own history of ruthlessness and, um, barbarism during WWII.

However, none of that excuses for an instant the fate that apparently befell Kenji Goto and Huruna Yakawa — who was beheaded earlier.

All of this insane ghoulishness only requires that we maintain the fight against these monstrous agents of evil.

ISIL’s appetite for barbarism stretches one’s ability to describe it in strong enough language. Heinous, despicable, barbaric, cruel? Yes, all of those are true, but they don’t go far enough. I’m at a loss to find the appropriate description to hang on these monsters.

They need to die. A painful and excruciating death would suit many of us just fine.

This still-new year has just welcomed the first of many 70-year anniversaries, most of which are related to the Second World War.

It was 70 years ago this week that the Red Army, which was storming across eastern Europe on its way to Berlin, liberated the Auschwitz death camp, where the Nazi monsters exterminated thousands of prisoners, mostly Jews, while pursuing what Adolf Hitler called “the final solution.”

Other death camps would be liberated by the Soviets — and by American, British and Allied forces rolling toward Berlin from the west. They would uncover horrors never imagined.

The world will spend a good bit of time this year looking back on the final chapter of the world’s most destructive conflict.

Seventy years ago this year:

* Hitler died, taking his own life to avoid being captured by the Soviet army. Good riddance to that hideous monster.

* Franklin D. Roosevelt died. For many Americans alive at the time, he was the only president they knew. He helped rescue the nation from the depths of depression and then led it into battle against tyranny.

* The Manhattan Project brought us the atomic bomb, which FDR’s successor, President Truman, ordered dropped on Hiroshima and Nagasaki. We’ll have much more to say about that at a later time.

* The Allies declared Victory in Europe, and the world celebrated VE Day, as Nazi Germany surrendered.

* The Japanese surrendered later and General of the Army Douglas MacArthur accepted their surrender aboard the USS Missouri.

* The United Nations was founded in San Francisco.

World War II ended and the world began picking up the pieces of its shattered existence.