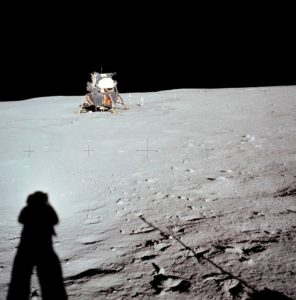 President Kennedy already had initiated the race to the moon. The United States was a distant second to the Soviet Union when he declared his intention to ensure that we “send a man to the moon and return him safely to the Earth” by the end of the 1960s.

Well, Americans got to the moon first. It was 49 years ago today that the late Neil Armstrong stepped off the ladder onto the moon’s dusty surface and pronounced, “That’s one small step for (a) man, one giant leap for mankind.”

He thrilled the folks back home. Not just in our country, but everywhere. Perhaps even in the Soviet Union.

We sent several more missions to the moon. Astronauts planted flags, dug up lunar dirt and brought it back, they drove around on “lunar dune buggies,” and one of them — the first American in space, the late Alan Shepard — even hit a chip shot that went for “miles and miles.”

Then we stopped going to the moon. It became too expensive. The public lost interest. We won the race. The act of launching three people into space aboard a flaming rocket carrying many thousands of pounds of flammable fuel no longer fascinated the American public.

I am one American who lived through that exciting time. I want them to return.

Subsequent presidents have given somewhat tepid support for the initiative of returning to deep space. The end of the Cold War in 1991 removed the Soviet Union from the world landscape. The Soviet descendants, though, have continued to send explorers into space. They now carry passengers with them. Some of them are Americans.

I am acutely aware of the expense of such exploration. However, it was what we were put on this Earth to do, to reach beyond our planetary comfort and to learn more about the world beyond.

Donald J. Trump has continued the presidential push — such as it’s been — to return one day to space. I want NASA to redevelop its own manned program. It’s what we do — and we do it well.

My sense is that enough time has passed since the last moon mission that we’ll get quite excited when the next rocket blasts off into the heavens with crews that will take the next “giant leap for mankind.” 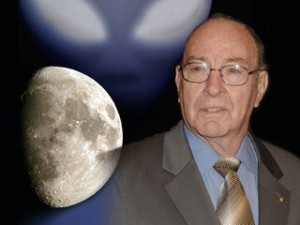 I learned something just a few moments ago about a member of one of the world’s most exclusive clubs.

Edgar Mitchell was one of 12 men in the entire world who have walked on the surface of the moon. He died over the weekend at the age of 85.

What I did not know about him was the was born in little ol’ Hereford, Texas, a Panhandle town known more for the “smell of money” that wafts from the cattle feedlots in and around the community.

Mitchell walked on the moon during the Apollo 14 mission commanded by the late Alan Shepard, the first American to fly into space. Shepard’s first flight occurred a decade earlier, in 1961, when he was launched aboard a small rocket, flew into a sub-orbit and then splashed down into the ocean about 15 minutes later. He would command the Apollo mission in 1971 and then, as many of usremember, hit that golf shot that traveled “miles and miles” in the light gravity on the moon’s surface.

Mitchell apparently had a totally different experience on the moon, which to my way of thinking is understandable — even one doesn’t quite understand the experience in and of itself.

He came to Earth and then spoke out over many years about extraterrestrials, and his belief that they have visited our planet. Mitchell had some form of spiritual awakening on the moon.

Think about that for a moment, though.

Where else that has been visited by human beings could produce such an experience?

I don’t believe what Mitchell has preached, that we’ve been visited by beings from outer space. I do, though, believe that one can experience something beyond our ability to comprehend simply by walking on the surface of another celestial body and looking into the sky to see Earth in the sky — 250,000 miles away.

The dozen men who’ve walked on the moon all came back with different experiences and differing points of view. Many of them coped well with the experience. I think, though, of moonwalker No. 2, Buzz Aldrin, who went into serious depression, suffering alcohol abuse.

And if you consider, too, that traveling to the moon — which is no small task to be sure — is just the first hopeful step in humankind’s exploratory evolution, what will be the reactions when we finally travel far more deeply into our solar system?

I’d pay real money to look at the psychological profiles of the individuals who are selected for the first mission, say, to Mars.

If one astronaut can return from a relative hop-and-skip into space believing the things discussed publicly by Edgar Mitchell, well, the next corps of deep-space pioneers will return with some seriously wild tales. 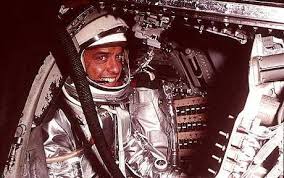 OK, so he’s no longer alive to celebrate it but I couldn’t let pass an item that I stumbled upon this morning.

The late Alan Shepard Jr. was born 92 years ago today.

Shepard enlivened a nation, invigorated our national psyche and gave us a sense of mission at a time when we needed it.

He did it simply by riding atop a rocket for a 15-minute ride into outer space. He splashed down a few hundred miles off the Florida coast into the Atlantic Ocean.

I was a youngster at the time. On May 5, 1961, when Shepard took off aboard that Redstone rocket, I was just 12. But I was fascinated, along with the rest of the country, by the notion of human beings flying into space.

The Soviet Union — which would be known later as the Evil Empire — had beaten us into space. Yuri Gagarin had orbited Earth a month before Shepard took off. The Soviets were beating us at our own game! President Kennedy would have none of it.

Shepard’s flight didn’t measure up to Gagarin’s orbit in the strictest sense, but it didn’t matter to a nation itching to get into the space race. Shepard’s successful flight put us in the thick of the fight.

He got another shot at space travel. A decade later Shepard commanded Apollo 14’s mission to the moon and hit that famous golf shot from the moon’s surface that flew for “miles and miles.”

I miss those days. I wish we could find it within our national spirit to insist on manned space flight. We’re now sending our astronauts into space aboard ships launched by our former arch-enemy; it’s called “Russia” these days, now that the Soviet Union has disintegrated.

Our space agency is developing a deep-space vehicle that eventually will take future pioneers to places like Mars and perhaps to the asteroid belt.

Is there national excitement as we await that day? Uhh, no.

We’re left to remember when gutsy test pilots such as Alan Shepard squeezed into tiny space capsules and flew aboard those relatively itty-bitty rockets. He gave us a national thrill that we haven’t duplicated in quite some time.

I hope I’m alive to see the first flight to Mars.

Meanwhile, happy birthday to a man former President Bill Clinton once described as “one of the great heroes of modern America.”

Allow me this admission: I didn’t do much thinking Sunday about the 45th anniversary of man’s first steps on the moon.

I was too busy traveling home from a glorious weekend with my family.

And to be frank, thinking of that day saddens me a little. It’s not because of the event itself. The late Neil Armstrong’s first step off the Apollo 11 lunar lander was captivating at a level I’d never experienced. “One giant step for (a) man, one giant leap for mankind” became a mantra to be repeated by proud Americans everywhere.

No, the sadness comes in realizing where we’ve gone — or not gone — in the decades since then.

We landed a few more times on the moon, had a near-tragedy when Apollo 13 exploded en route — only to be brought home in a miraculous seat-of-the-pants rescue effort. Alan Shepard, America’s first man in space, got to land on the moon and hit that golf shot that went miles.

Those were heady times.

Then the missions became “routine.” How sad. NASA pulled the plug after Apollo 17. It embarked on the Skylab mission to test humans’ long-term endurance in space. Then came the space shuttle experiment, with its huge highs and devastating tragedy.

Then it ended. The shuttle fleet is retired. We’re piggybacking into space aboard Russian rockets.

I admit to longing for the days when we could get re-inspired the way we were when President Kennedy made it the national goal to “put a man on the moon before the decade (of the 1960s) is out and return him safely to the Earth.” We had that big, bad Soviet Union to race to the moon. We won that contest.

Now there’s some vague talk about going to Mars — eventually. Why “vague” talk? Because one hardly ever hears anything publicly about what’s going on. NASA engineers are toiling in obscurity — apparently — designing a vehicle to take humans to the next planet out there in our solar system.

My late mother and I spent many mornings awaiting the launches of the early space missions. Mercury and Gemini preceded the Apollo program. We agonized over the delays. Cheered at the launch. Wept with joy when the men landed safely in the ocean.

I’ve never grown tired of watching these vehicles lift off from the pad and roar into space. It pains me that the nation became bored with it.

I am grateful to have watched humanity’s first steps on the moon. I surely now want to live long enough to hear someone say, “Houston, we have landed on Mars.”