Hell has frozen over and the sun is going to rise above the western horizon tomorrow morning.

How else to explain that televangelist Pat Robertson and yours truly are on the same page regarding arguably the most emotionally charged issue of our time . . . or any time, for that matter?

Robertson says the Alabama Legislature has “gone too far” in banning abortion in that state. Gov. Kay Ivey signed the bill into law earlier today.

Robertson calls the Legislature’s move “extreme.” Indeed, he is right. Imagine that, if you can; he and I agree on something.

The law bans abortion except only when the mother’s health is in peril. Rape victims? Those who are impregnated by their, oh, fathers or uncles or older brothers? They’re out of luck. A doctor who terminates those pregnancies are going to face prison terms of as long as 99 years.

Well, I don’t know yet how to act this late in the day.

I know the sun will rise in the morning. I just hope it comes up on the correct side of the house. 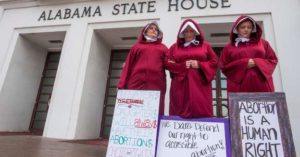 Oh, I do hate commenting on abortion or, to borrow the current euphemism, “women’s reproductive rights.”

However, the decision by the Alabama Legislature to make abortion a criminal act deserves a brief comment here.

Alabama’s legislators have made a serious mistake. They have sent to the governor’s desk a bill that would punish doctors with prison terms of as long as 99 years for performing an abortion at any stage of a woman’s pregnancy.

Here’s the worst part of it: The bill makes no exception for women who are impregnated in an act of rape or incest; the only exception is if the woman’s health is in danger.

If Gov. Kay Ivey, a Republican, signs the bill, it seems to set up a clear challenge eventually of Roe vs. Wade, the landmark 1973 Supreme Court decision that legalized abortion in the United States.

Here is a potential consequence of this legislation: We well might see a spike in what is called “back-alley abortions,” where women who cannot carry a pregnancy to full term will seek illegal methods to end the pregnancy. Some of these processes are too gruesome for me to describe in this blog; you know what I’m talking about. The consequences of these hideous acts also are dire in the extreme.

So what does the president of the United States say about this Alabama law? He endorses it as a hedge against what he describes as procedures supported by Democrats who favor “ripping the baby from the mother’s womb” and essentially “executing” the child — which, of course, is a bald-faced lie.

This blog post is going to get some blowback from readers who endorse the Alabama decision. Fine. I’m willing to take the hits.

I am not willing to remain silent while one of our states criminalizes an act that the U.S. Supreme Court has determined to be legal. I would never counsel a woman to obtain an abortion. That is my point. It’s not my business. It is hers alone!