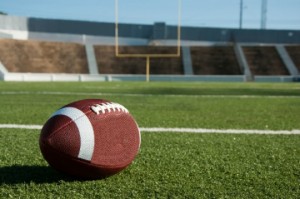 I am going to offer a bit of unsolicited advice to individuals who likely wouldn’t give a flying fudge what I think … but here goes anyway.

Next time big-school athletic directors schedule Appalachian State to play a football game against your nationally ranked college team, don’t consider these guys to be a “cupcake opponent.” They well could beat your guys.

Appalachian State did it again today, knocking off the No. 6-ranked Texas A&M University Aggies in College Station … in front of the 12th Man, aka the 100,000-plus Aggie fans who jam Kyle Field when the Aggies play football.

Does it sound familiar? It should. Appalachian State embarrassed the Michigan Wolverines in 2007, who were No. 5 when the underdogs ventured to The Big House in Ann Arbor. They came out victors.

Oh, and just this past week, Appalachian State scored 40 points in the fourth quarter and came within a whisker of beating North Carolina in the Tarheels’ crib.

Appalachian State is located in Boone, N.C. About 20,000 students are enrolled there, so it isn’t exactly a tiny school. It just isn’t known as a college football power.

At the time I was a fairly avid collegiate football fan. I grew quickly to appreciate one of the country’s more intense gridiron rivalries not long after arriving in the Golden Triangle.

I refer to the University of Texas-Texas A&M rivalry. They used to play that game on Thanksgiving Day. My wife and I became friends in Beaumont with diehard Aggie alumni. They were four brothers, all of whom graduated from A&M; their children went there, too; and so did their grandchildren. They bled Aggie Maroon. I was schooled immediately — and often — about how much Aggie football meant to Texas Aggie families.

I even learned to refer to the University of Texas as “texas university.”

Then the Aggies decided they wanted to bolt to the Southeastern Conference. They wanted to play tackle football against Arkansas, Auburn, Alabama, Georgia, Tennessee … and some other schools.

Then the rivalry was dissolved.

I am still somewhat saddened that we can’t see the Longhorns play the Aggies on Turkey Day.

I have no particular allegiance to either school. I didn’t attend either of them; neither did our sons. I wrote a year ago about missing a Thanksgiving tradition. I still miss it.

Can’t there be a way for the athletic directors at these schools to work out a non-conference game that pits these football teams against each other … on Thanksgiving Day? 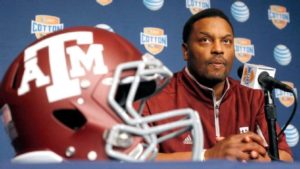 One game does not a college football season make.

Listen up, Texas A&M University football fans — and at least one regent. The Aggies’ epic meltdown this past weekend in Los Angeles against UCLA shouldn’t by itself spell the end of head coach Kevin Sumlin’s tenure.

A&M System Regent Tony Buzbee, a Houston lawyer, has posted a demand on Facebook that Sumlin get the axe.

I don’t know all that much about football. I have no idea how much Buzbee knows. Maybe he’s a gridiron guru in disguise.

The Aggies were leading the Bruins by 34 points. Then the Bruins stormed back. UCLA won the game 45-44. The Aggies and their fans/boosters are understandably stunned and staggered.

“But tonight I am very disappointed and I have to say this. Kevin Sumlin was out-coached tonight, which isn’t new. He recruits well, but can’t coach the big games, or the close games. Our players were better tonight. Our players were more talented tonight. But our coaches were dominated on national TV, yet again. I’m only one vote on the Board of Regents but when the time comes my vote will be that Kevin Sumlin needs to GO.

“In my view he should go now. We owe it to our school and our players. We can do better.”

I will stipulate that I am not an Aggie. I didn’t attend college in Texas. I have no dog in this fight. I don’t follow Texas college football all that closely. My own gridiron loyalty lies way up yonder, in Oregon, my home state and where I attended college. I’ve been cheering — and of late jeering — the Oregon Ducks for many years.

Buzbee, though, got his undergrad degree at Texas A&M. So he feels it, man.

I’ll conclude with this: If the Aggies choke again in their next game or in the game after that, then I’d be willing to listen to gripes about Coach Sumlin. Until then, let the man do his job and let the student-athletes play their hearts out for him.

This is a very cool development down in Aggieland.

The Texas A&M University Corps of Cadets — formerly an all-male bastion — is going to be led next year by a woman.

Her name is Alyssa Marie Michalke. She hails from Schulenberg and next school year she’ll lead the Corps, the A&M student military organization.

We talk about gender equality all the time. The Pentagon in recent years has relaxed its ban on women serving in combat; women now are able to participate in the combat arms — infantry, armor and artillery. Yes, women have been flying aircraft in combat for years, be they high-performance fighter jets or bombers or close-support helicopters.

Michalke’s leadership role at the Corps of Cadets, though, signals a new day at A&M, which for many decades has taken great pride in the military officers it trains.

The Texas Tribune reports: “It’s a great honor and a great privilege,” said Michalke, a junior … who’s majoring in ocean and civil engineering. “There’s been so many well-qualified cadets that have come before me. It’s just an honor to be mentioned in the same sentence as these remarkable young men and women.”

Michalke told the Tribune that she once was shy, such as when she enrolled at Texas A&M as a freshman.

It’s a good bet, now that she’s about to lead the Corps of Cadets, that she’s gotten over her shyness.

Is there no end to the chuckleheaded behavior of noted American athletes?

New York Yankees slugger Alex Rodriguez has been suspended by big league baseball, along with a dozen other players over allegations they took performance-enhancing drugs.

The Aggies have opened their football camp and are thought to be among the top five college football teams in the country. Manziel, aka Johnny Football, is a big reason why A&M is riding so high.

Now, though, the NCAA is said to be investigating whether Johnny Football broke one of the singularly rules of college football. Somewhere in the NCAA handbook it says athletes can’t take money for anything. The blue-chip athletes get a free college education in exchange for applying their athletic skill. Therefore, taking money – or trading on their famous name – is forbidden expressly by the rules.

Did Johnny Manziel take money or didn’t he for taking part in an autograph-signing session?

I sincerely hope the young man didn’t do it. However, I cannot help but think of the old saying about finding fire under all that smoke.