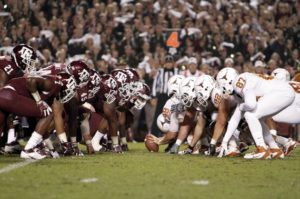 If only Texas A&M University hadn’t decided to play football in the Southeastern Conference. If only the Aggies had stayed put in the Big 12. If only . . .

I’d be watching a Texas tradition today while consuming some turkey and all the other stuff.

Thanksgiving Day meant some good ol’ college tackle football between the University of Texas and them Aggies of A&M.

I wasn’t born in Texas. I didn’t attend either school. I’ve lived in Texas long enough — 34 years now — to appreciate the thrill, the pageantry and the excitement associated with this holiday tradition.

If only the Aggies hadn’t bolted to the SEC.

I have made the acquaintances of many Texas Exes and dedicated Aggies over the years. I have no particular loyalty to either school. Neither of my UT or A&M friends are “better” friends than the others. I do like to watch tackle football played at the college level.

My wife and I have attended one A&M football game. It was years ago in Lubbock, when the Aggies played Texas Tech’s Red Raiders in a windswept event at Jones Stadium. The Red Raiders won that game in a thriller.

Do you know what thrilled the daylights out of me, though? It was the sight — and the sound! — of the Aggie marching band walking onto the field. Talk about spit-and-polish precision!

Well, we won’t see any of that today. Nor will we get to see Bevo the steer roaming the sideline in front of the Longhorn faithful while his UT gridders play some block-and-tackle with their Aggie rivals.