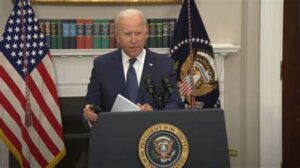 The new No. 1 terrorist enemy of this nation — apart from the domestic goons who want to overturn an election — has morphed into a version of an old enemy.

The Islamic State today claimed credit for two explosions at Kabul’s airport in Afghanistan. Thirteen U.S. service personnel died in the blasts. I understand 12 of them were Marines; one of them was a Navy corpsman.

This nation is in the midst of an evacuation of U.S. citizens and Afghan allies who aided us during the two decades we fought the terrorists.

Now comes a group called ISIS-K, an offshoot of the monstrous ISIS. ISIS=K is thought to be an enemy of the Taliban, the Islamic fundamentalists who are taking control of Afghanistan as our forces get set to leave.

President Biden spoke strongly, earnestly and with outward conviction. Those who are responsible for the act today — one of the deadliest in the entire Afghan War — should understand that “we will hunt you down and make you pay,” Biden said.

Well, the last time we made that pledge — after the 9/11 attacks — we made good on it with the SEAL/CIA commando raid that killed Osama bin Laden in May 2011.

I doubt seriously it will take us a decade to find the monsters who did this deed and “make them pay.”

I cannot know this for certain, but I am willing to lay down the wager of a lifetime that President Biden today got on the phone with Army Gen. Richard Clarke, the head of our special operations command, and delivered the order to hunt down the ISIS-K terrorists … and take them out.

But … first things first. Our crack intelligence team needs to find these creatures; it needs to confirm their location; then the strike needs to be planned and then executed.

My heart is broken today as we mourn the deaths of our service personnel. It does, though, appear to give credence to President Biden’s insistence that we exit the battlefield in just a few days. He said he feared terrorist attacks on our forces the longer we stay in the country.