I discovered something on the Internet I didn’t know even existed. To be candid, it blew me away to find it. So much so that I want to share it here.

The quality of the video isn’t great, but it’s watchable if you’re interested.

C-SPAN is the network that appeals mainly to political junkies. I am one of them. The call letters stand for “Cable-Satellite Public Affairs Network.” Need I say more?

I enjoy the network and its utterly unbiased presentation of the discussion of the issues of the day. Its founder, Brian Lamb, is legendary in his insistence that his on-air reporters steer clear of any bias.

In 1996, I was new to the Texas Panhandle. I had started a job a year earlier as editorial page editor of the Amarillo Globe-News. C-SPAN was conducting a nationwide tour of every congressional district in the United States.

The network called me and asked if I would be willing to be interviewed for a discussion of the 19th Congressional District and its representative, Lubbock Republican Larry Combest.

“Sure,” I said. Here’s the deal, though: I had to study up on the 19th  District, learn enough about it to talk intelligently about it for broadcast on the air.

C-SPAN’s series featured a “school bus” that came to each congressional district. It contained a traveling camera crew. A reporter asked me questions; a cameraman video recorded it. The interview lasted about 30 minutes at the AGN offices in downtown Amarillo. The finished product was cut down to about three minutes on the air.

It was a fascinating “teachable moment” for this newcomer to the Texas Panhandle. It presented me with one of the more incredible experiences of my journalism career. I enjoyed doing it immensely.

In 1996, Amarillo was divided into two congressional districts. Combest represented the19th, which included Randall County. The northern portion of Amarillo was represented by the 13th District and its then-freshman congressman, Republican Mac Thornberry.

I honestly cannot remember who C-SPAN recruited to talk on the air about the 13th District; hey, it was a long time ago.

This is just a nugget that I wanted to share with you, given the many miles the world has traveled over the past two-plus decades since this segment aired in the delivery of news and commentary to the public. 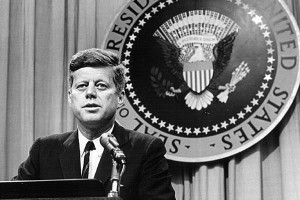 The Kim Davis Saga in Rowan County, Ky., should serve as a key lesson to all public officials who take an oath to perform their duties on behalf of the entire public constituency they serve.

Davis took that oath to serve as county clerk. One of her duties is to issue marriage licenses to those who request them. The highest court in the land then decreed that gay couples are entitled to the same rights of marriage as straight couples.

That doesn’t comport with Davis’s Christian values, she said. She refused to issue licenses to same-sex couples and now she’s been ordered to jail by a federal judge.

Public officials take an oath to serve everyone. Their oath is a secular one. One’s faith has no bearing on whether they should perform their duties.

This does sound familiar to those of us old enough to remember a controversy 55 years ago involving a young candidate for president of the United States. Democratic U.S. Sen. John Kennedy was his party’s nominee and was campaigning to become the first Roman Catholic ever elected to the presidency.

Questions arose during that campaign about Kennedy’s ability to fulfill the oath he would take if he were elected. Would he be loyal to the U.S. Constitution or, some wondered, to the Vatican? Some die-hard conspiracy theorists conjectured that he would be taking orders from the pope.

Sen. Kennedy then decided to settle the issue once and for all. He came to Texas and, speaking to a Protestant gathering of clergy, made a solemn vow: He would follow the Constitution and if in the highly unlikely event he encountered an issue that contradicted the teachings of the church and he could not act on that issue, he would resign the presidency.

And then he added: “I hope any conscientious public servant would do the same.”

He won the 1960 election, took his oath and as near as anyone can tell was loyal to the U.S. Constitution.

Kim Davis cannot perform the duties of her office. She says they conflict with her faith.

She needs to quit that public office.