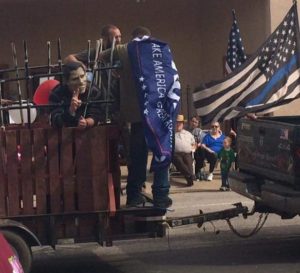 KGNC-FM radio in Amarillo asks for comment on whether a man who portrayed an “imprisoned” individual believed to be President Obama went over the line at the Tri-State Fair parade through the city’s downtown district.

Yes, he crossed several lines. One of them was civility. Another was good taste. Another dealt with respect for the high office of president of the United States.

The individual reportedly was dressed in black. He was “contained” behind bars. There was a guy with a “Make America Great” banner standing on the wagon carrying the Obama-like “prisoner.”

Hmmm. Political? Do you think?

I consider it a disgraceful slight to the office of the presidency. It suggested that the current president needs to be locked up. For what, I don’t know.

You know the cliché about “time and place for everything.”

This kind of overt politicization need not occur in a parade meant to honor a community event, the Tri-State Fair.

What’s more, it need not disrespect the presidency of the United States of America.

The folks who run the Tri-State Fair, though, ought to set some standards for the kind of exhibits it allows to roll through public streets.

This one was disgraceful. 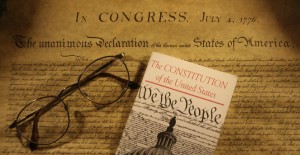 Colin Kaepernick is a bozo. A chump.

He’s become a poster boy of sorts for all kinds of issues stemming from his decision to remain seated during the playing of the National Anthem before a pro football exhibition game between the San Francisco 49ers and the Green Bay Packers.

Kaepernick, a quarterback for the 49ers, said he can’t stand in support of a flag that represents a country that oppresses “people of color.” Kaepernick is half black and half white.

Hmm. OK. I wasn’t aware of Kaepernick’s social conscience. I don’t recall him ever speaking out before. But I guess one has to start somewhere. Thus, Kaepernick chose to make this profound political statement in this highly visible fashion.

I just want to make one comparison with Kaepernick’s demonstration. He reminds me of the flag burners, the goofballs who think burning Old Glory in public to protest this or that cause is going to win them support.

It won’t. It hardly ever does.

However, it’s protected “speech.” The U.S. Constitution allows Americans to make such statements against government policy. Kaepernick chose to mount his grievance with a lousy demonstration of defiance.

He’s not going to win many converts to his cause any more than the flag burners manage to make friends and allies when they do the things they do to protest government policy.

The Constitution, though, gives even chumps like Colin Kaepernick the right to speak out as he has done.

I honor and cherish that right, even if I detest the way some of us exercise it. 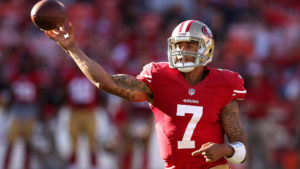 I’ve been stewing for a couple of days over the news of Colin Kaepernick’s decision to sit during the playing of the National Anthem prior to the start of a pro football exhibition game.

Kapernick has been reviled, vilified and called everything but a traitor for refusing to stand.

I am not going to go that far.

I wish the San Francisco 49ers quarterback had stood and paid proper respect to the flag and to the nation where he has earned a handsome living playing a kids’ game. He said he sat because he couldn’t support a nation that oppresses “people of color.”

He could have written an essay for newspapers, he could have tweeted his displeasure with American policy toward “people of color,” he could posted something on Facebook.

But no-o-o-o. He wanted to make a spectacle of himself in a stadium in front of tens of thousands of spectators.

Kaepernick obviously wasn’t talking about himself, as he’s hardly been oppressed, except perhaps by his coaches who cannot decide whether he should be the starting quarterback.

Critics have noted that in many other countries around the world, Kaepernick would have been arrested and jailed for failing to stand while the band played a national anthem.

Let’s understand this: Kaepernick is an American citizen. He refused to stand in this country, which has no law requiring Americans to get off their duffs — if they are able — while we play the “Star-Spangled Banner.”

So, he made a political statement. He’s not the first one to do so. He won’t be the last.

Sure, he’ll likely pay a price down the line. My hunch is that sports apparel shops won’t be selling many 49ers jerseys with Kaepernick’s name and No. 7 from this day forward.

The fact remains, though, that our nation’s belief in free speech and political expression gives all of us — even well-known pro athletes — the right to make fools of themselves.

Garland police officers responded as they should have when two gunmen opened fire at a “contest” to draw the Islamic prophet Muhammad.

They shot the men dead.

Now the debate has ensued. Were the provocateurs — the folks who sponsored a contest they knew would provoke that kind of response from Muslims — merely exercising their rights of “free speech”?

They knew that illustrating the prophet is offensive to Muslims. Indeed, the group that sponsored the “contest,” an outfit called the American Freedom Defense Initiative, has been identified as an extremist anti-Muslim group.

So, do you think these folks knew what to expect when they staged this event? My guess is that they knew.

The shooters were described as Islamists. One of them, Elton Simpson, allegedly wrote a good-bye note to his friends and family before he started shooting. He knew he’d meet his end in Garland.

As Jim Mitchell of the Dallas Morning News writes in his blog: “Islamic extremism is a global curse. Cartoon contests in Garland aren’t going make a bit of difference in combating it. But insensitive contests like the one yesterday will provoke lone wolves and insult an entire religion. And I ask, to what purpose? This wasn’t discourse; it was a opportunity to draw offensive cartoons for the sake of drawing offensive cartoons. My idea of defensible free expression has a higher and more noble purpose.”

It’s widely established and known around the world that Muslims don’t react well when Muhammad is depicted in cartoons or illustrated simply for the sake of producing a worldly image. Do non-Muslims agree with this religious tenet? No. But it’s not non-Muslims’ place to judge how those who worship a certain religion are supposed to believe.

We should be grateful that the FBI had tipped off the Garland Police Department.

The question has arisen: Should those nimrod students caught on video shouting racial epithets be allowed to say those things because it’s “free speech” guaranteed in the U.S. Constitution?

Here’s my answer: No.

The University of Oklahoma has acted on several levels in response to this hideous video in which white students are shouting the n-word and making references to lynching while saying bad things about black students on the campus.

The students have been expelled; the fraternity, Sigma Alpha Epsilon, has been disbanded; University of Oklahoma President David Boren has issued the strongest statement possible in condemning such conduct.

Will it end this kind of despicable behavior on college campuses across the land? Don’t hold  your breath.

This isn’t a free speech issue. Students ought to be held to some standard of conduct. What the nation has seen coming out of that video at OU is a demonstration of crass behavior that stoops to unspeakable levels.

Jim Mitchell’s blog for the Dallas Morning News, which is attached to this post, doesn’t address the free speech issue directly, but he presents an interesting view of what happened that day when the SAE students went berserk.

One of the aspects of modern life, and the OU students should know this, is that nothing — not a single act that anyone commits in public — is immune from technology’s prying eyes. Everyone has a camera these days; it’s contained in that little telephone we’re carrying around with us. You start chanting things you don’t want the world to hear? Be careful, because someone’s going to record it and send it out there.

Free speech? Not even close.

As Mitchell writes in his blog: “These students deserved hefty punishment and they received it, unlike previous generations of Sigma Alpha Epsilon students who apparently learned the same vile song in an age without social media. But these students have absolutely no power to impact lives — yet.”

How to describe what took place on a California university campus.

All of the above … and then some?

A group of anti-Israel students this past Thursday disrupted a University of California-Davis rally by Jewish students by shouting “Allahu Akbar!,” an Arabic phrase that means “God is great.” The pro-Israel students sought to protest a student government decision to divest from Israel as part of a student movement designed to protest Israeli policies in the Middle East.

Some unknown vandals spray-painted swastikas on a fraternity house. Swastikas! The very symbol of the Nazi regime that exterminated an estimated 6 million Jews prior to and during World War II.

Some anti-Israel student posted a note on a Facebook page about Hamas and Sharia law taking over the UC-Davis campus. Whatever. Actually, Sharia law hasn’t taken over anything — let alone a major public university campus. As for Hamas — the notorious terrorist organization that runs the government in Gaza — it has been identified for what it is: a cabal of killers.

But the point here is that this kind of monstrous behavior shouldn’t be tolerated anywhere.

The anger expressed on the campus is preposterous in the extreme.

Free speech is worth protecting — but it ought at least to be civil.