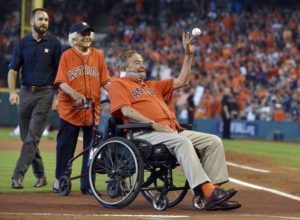 What does one say only moments after learning that one of America’s most beloved public figures has left this good Earth?

Barbara Pierce Bush has died at the age of 92. It was no surprise. She was in “failing health,” surrounded by her family. She had ordered an end to preventative health care, focusing instead on “comfort care.”

The wife of the nation’s 41st president made no pretense about the fake pearls she wore around her neck. She said they were intended to cover up her wrinkles. But everything else about her was so very real. She was known to her kids and grandkids as “The Enforcer.” She set the rules and she made them stick.

And the nation fell madly in love with this woman, a proud first lady — but more importantly a proud wife, mother, grandmother and great-grandmother.

She promoted literacy. She became an advocate for research on HIV/AIDS.

The nation will grieve. The president will order flags to fly at half-staff at the nation’s federal buildings. We’ll all remember Barbara Bush as the matriarch of one of the nation’s most iconic political families.

She was a great American. 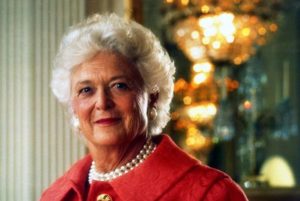 I don’t know about anyone else, but I do have difficulty watching admired public figures struggling as they fall into “failing health.”

So it is with former first lady Barbara Bush, who lived in the White House with her husband, former President George H.W. Bush, from 1989 until 1993.

She is now at home in Houston. Mrs. Bush has declined any further medical treatment. She has requested “comfort care.” Her family has gathered around her.

Yes, it looks as though the end is near. More than likely.

My difficulty deals with watching this marvelous woman struggle to remain among us. The love story that unfolded in January 1945 when she and the young Navy aviator married. They now hold the presidential record for marital longevity.

Mrs. Bush always acquitted herself with class as well as with candor. Her children and grandchildren call her The Enforcer. No one put anything past this marvelous individual.

She made literacy her hallmark while serving as first lady. She read to children. She sought to imbue in our kids a love of literature. Mrs. Bush created a foundation to continue that work after her time as first lady had expired.

The world has joined in offering love and support for this iconic American political family that has been led by a matriarch who stood tall next to her husband — and her oldest son, George W.  Bush, who also ascended to the presidency.

Still, it is damn hard to watch this story unfold.

Jeb Bush’s mother doesn’t want him to run for president.

Jeb’s father reportedly is all in favor of his running.

Who between them has the former Florida governor’s ear? Well, Jeb Bush says he’s “thinking about” running for the Republican nomination for president in 2016.

I guess that settles it. Dad’s preference wins out.

Jeb Bush’s dad, of course, is the 41st president, George H.W. Bush. “Mom” is none other than the strong-willed Barbara Bush, who’s known to speak her mind with great candor.

Mrs. Bush said a few months ago that the country has seen “too many Bushes” in the White House, meaning her husband and her eldest son, George W. Bush, who served two terms as the 43rd president of the United States.

I’m a bit intrigued, however, at the thought of another Bush presidential campaign against someone named “Clinton,” who in this instance is Hillary Rodham Clinton, the wife of the man who beat George H.W. Bush in the 1992 campaign and who has served as a U.S. senator from New York and as secretary of state in the administration of Barack Obama, against whom she ran for the Democratic presidential nomination in 2008.

Jeb Bush’s governorship is generally thought to have been a successful one. He’s an articulate advocate for more, shall we say, moderate views within the Republican Party.

Were he to ask my opinion, I’d encourage him to run. He seems to have the fire in his gut and he certainly has the experience.

Yes, I know that the Bush brand — even within the Republican Party — isn’t a plus for Jeb. Other possible Republican contenders aren’t exactly extolling the virtues of George W.’s presidency. That’s a problem for the younger brother.

Still, Jeb Bush must weigh the conflicting advice of two quite admirable people: his parents.

Barbara Bush, one of former President George W. Bush’s twin daughters, has declared that former Secretary of State Hillary Rodham Clinton is “unbelievably qualified” to be president of the United States.

Who knew the Bush family had a closet Democrat in its midst?

Barbara, 31, hopes Clinton runs for the White House in 2016. She did stop short of saying HRC would get her vote were she to take the plunge.

It’s interesting in the extreme, though, to hear the daughter of such a prominent Republican make a glowing statement about a prominent Democrat. That sets up the potential for an interesting tussle within the GOP, which already is turning on itself over disagreements on immigration reform, spending cuts, and a possible government shutdown as it relates to the future of “Obamacare.”

George W. Bush has stayed out of the fray. Good move, Mr. President. Now one of his daughters seems to be taking baby steps back into it with her comments about a possible Democratic presidential candidate who, without doubt, is one of the sworn enemies of the tea party movement within the GOP.

How will the tea party wing react to this virtual endorsement? Will it scold the former president for not “counseling” his daughter sufficiently enough? Might the tea party folks declare unofficial war on the Bush family for being so, so, so “establishment” in its Republican orthodoxy?

The big question might be, how will Democrats handle these glowing words if their party nominates Clinton to be their party’s standard-bearer in the summer of 2016?