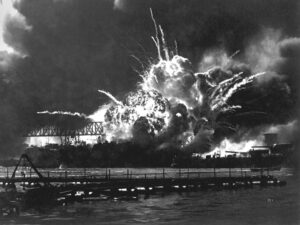 As a general rule I take every opportunity available to me to salute my favorite veteran, but sadly I fell short this past Veterans Day.

Thus, I will make up for it today by saluting my favorite vet — my dad — on Pearl Harbor Day. Yes, there is a clear connection between them.

President Roosevelt asked Congress the next day after the “date which will live in infamy” to declare war on “the Empire of Japan.”

Dad didn’t wait for the president’s message. Dad, my grandparents and his six brothers and sisters were listening to the news that Sunday after the attack on Pearl Harbor. I would learn much later what happened next.

Dad walked out of the house in Portland, Ore., ventured downtown and sought — on that very day — to enlist in the Marine Corps. The USMC office was closed. So, not to be deterred, Dad walked across the hall and joined the Navy.

Yes, on that very day that the nation was stunned into disbelief over what happened to our fighting men in Hawaii, Dad decided to get into the fight.

On that day, the Greatest Generation was born and my father was among the first of the 16 million Americans who suited up for battle.

The Navy would send Dad to Europe to fight the Nazis and the Italians, who also had declared war on the United States. He fought with valor aboard ship in the Mediterranean Theater of Operations, enduring incessant bombardment from enemy aircraft.

It has been written that the Japanese attack at Pearl Harbor only succeeded in “awakening a sleeping giant and filling him with a terrible resolve.” No truer words could have been put down in that moment.

A tiny fraction of the 16 million Americans who joined the fight are still with us. Dad died a long time ago, but I remember and honor his service to the nation with the deepest pride that a son can have.

It’s been 81 years since, in the words of President Roosevelt, “the dastardly attack” changed the world forever. May none of us ever forget the sacrifice of those who answered the call to arms.