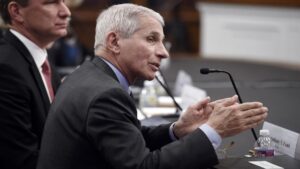 While we’re giving thanks to this or that person, I want to offer a word or two of gratitude for the public service delivered by someone who served seven U.S. presidents.

Anthony Fauci has retired from his post as chief medical adviser to President Biden. He is calling it a career after serving as the nation’s chief infectious disease expert.

I want to offer him thanks for taking on a job that earned him as many foes as friends over the years. Why is that? Because he was unable to predict the course that infectious diseases would take, but he still managed to save literally millions of lives over his many years of service.

Republicans who are about to take control of the House of Representatives have promised to bring Dr. Fauci back to Capitol Hill to answer stern questions about his service during the COVID pandemic. The good doc likely will stand strong against the GOP onslaught.

I had the pleasure of meeting Dr. Fauci while attending the International Conference on HIV/AIDS in Bangkok back in the summer of 2004. He was there to provide wise counsel to those seeking answers to that disease. I was in Bangkok as part of a journalist contingent traveling through Southeast Asia to learn about the impact of the HIV/AIDS epidemic in that part of the world.

Yes, there were some rocky times, particularly during the Trump years as the administration sought to get its arms around the COVID virus. The vitriol hurled against Dr. Fauci from those on the far right has been unfair and just plain wrong.

I just want to take this brief moment to express one American patriot’s deep thanks for the service Anthony Fauci delivered. Those who survived illness from the killer virus well might owe this good man their lives.