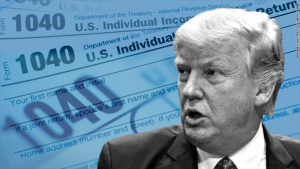 How does the saying go? Oh, I know: Inquiring minds want to know … actually those inquiring minds need to know and have a right to know.

The U.S. Supreme Court has cleared the way for the U.S. House Ways and Means Committee to get its hands on Trump’s tax returns. The court didn’t disclose any details of its decision or reveal how the justices voted on it. Now, that begs the question: Does that mean you and I will see them? Not right away.

However, given the sieve quality of Congress, my guess is that we’ll get a peek at them in due course. Maybe soon.

Why is this a big deal? It’s a big deal because Donald Trump made it a big deal in 2015 when he announced his intention to seek the presidency. He rode down the Trump Tower escalator and said, among many things, that he would release the returns as other candidates have done.

Then he backed off. Then he said he would release them when the Internal Revenue Service completed its audit of the returns. We never learned whether the IRS was actually auditing them; Trump never produced any evidence of an audit. The IRS said it couldn’t confirm an audit but said that an audit didn’t preclude someone from releasing the returns.

Then he balked again. He’s been fighting release of the returns ever since.

Many of us want to see the returns. We are entitled to see them. The man worked for us. Trump was our “employee” for four years.

He wants to run for POTUS again. He likely will bellow, blather and boast more about his wealth. I long have known that the truly wealthy among us don’t brag about it. Thus, I am suspicious of Trump’s dubious claims of fabulous wealth.

Let us see for ourselves.