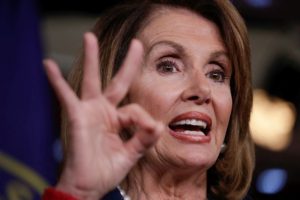 Nancy Pelosi has made her share of foes — as well as friends — over her many years as a leader in Congress.

Today, though, the lame-duck speaker of the House demonstrated a rare form of grace and class as she declared her intention to stay in Congress while forgoing any future attempts to remain a leader within the Democratic Party caucus.

Pelosi can consider me a friend and a fan, for sure.

She spoke to a nearly full House of Representatives chamber today to announce her political future. Pelosi declared her intent to remain loyal to her San Francisco constituents … also while remaining loyal to the oath she took as a member of Congress to protect and defend the Constitution against “all enemies, foreign and domestic.”

She soon will hand the gavel over to whomever becomes speaker.

As is always the case, one side of the chamber stood and cheered at the appropriate time. The other side, the one occupied by Republican members, didn’t always stand, but one could see some GOP members clapping politely.

They all stood and cheered as Pelosi paid tribute to her husband, Paul, who is still recovering from injuries he suffered in that brutal attack at the couple’s SF home in what clearly was a political assault.

Pelosi called herself a “proud Democrat,” a mother, grandmother and a patriot who loves our country to the fullest. I believe in her faith and devotion to our beloved nation.

Yes, the Pelosi era in the House is about to come to an end.

May this classy and devoted public servant continue to serve her constituents with the same honor and dignity she served the nation as the speaker of the House.