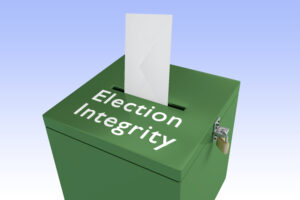 The defamation of state, county and municipal election officials continues as the proponents of The Big Lie spew their rubbish.

When I hear the trash flow from the mouth of, say, Kari Lake in Arizona — the MAGA-loving Big Liar who lost the race for governor in that state — I am filled with rage on behalf of the people whose integrity she defames.

She said just the other day that Arizona election officials are incompetent and corrupt. Once again, she provides no proof of what she is alleging.

I worked with election officials during the nearly 37 years I toiled as print journalist. I did so in two states, in Oregon and Texas. To a person — be they Democrat or Republican — they were competent, filled to the brim with integrity and dedicated fully to the oaths they took to protect and defend the constitutions of the state and the nation.

They worked their tails off to ensure election integrity, whether they served the people of Clackamas County, Ore., or Jefferson, Randall or Potter County, Texas. I got to know all the county clerks whose job was to oversee elections and protect their integrity.

It simply sends my blood to a full boil when I hear tinhorn pols take pot shots at these dedicated public servants. Make no mistake about this fact: The individuals who incur the unjustified wrath of these politicians are the local folks, some of whom are elected officials themselves. Furthermore, they all take oaths of office that usually end with the phrase, ” … so help me God.”

Thus, the oaths are sacred. They are holy. They are not to be violated. Indeed, they are the same oaths the pols who accuse them of corruption themselves take.

The election deniers and MAGA types who level these baseless accusations are guilty of defaming the good character of others. They sicken me to my core.