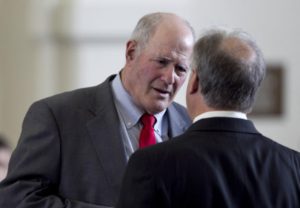 It’s been a good while since the last time I can recall so many politicians making headlines by endorsing candidates from “the other party.”

It’s happening on the eve of the 2022 Texas midterm election.

Former GOP Lt. Gov. Bill Ratliff is going to cast his ballot for Democratic challenger Mike Collier. The man who was known in the Texas Senate as Obie Won Kenobi ain’t gonna support incumbent Lt. Gov. Dan Patrick. Neither is Amarillo GOP state Sen. Kel Seliger or Tarrant County GOP Judge Glen Whitley, both of whom have thrown their support behind Collier.

It all seems to speak to the deep divisions within the Republican Party. I know Seliger quite well, and I know of Ratliff, given that I was paid to follow legislative activities during my time as a full-time journalist. They both are “mainstream Republicans,” and neither of them is wedded to the fiery MAGA rhetoric that folks like Patrick use to blister their opposition.

I am acutely aware that a handful of examples does not constitute a groundswell. It might, though, be a harbinger of what could be boiling under the political surface as we get nearer to midterm Election Day.

One thought on “More Rs cross over?”