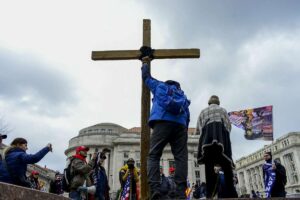 A declaration by a member of Congress didn’t receive nearly the attention it deserves; therefore, I will try to rectify it with this brief blog post.

U.S. Rep. What’s Her Name — aka Marjorie Taylor Greene — the Republican from Georgia, recently pronounced herself to be a “Christian nationalist.” I can’t recall the context of her comment or the venue in which she uttered it. All I can recall is her saying, “If you want to call me a Christian nationalist, then that’s what I am.”

That is a frightening thing to hear from a member of Congress.

I shall remind you once again that these individuals take an oath to “defend and protect the U.S. Constitution.” Indeed, I took such an oath in August 1968 when I was inducted into the U.S. Army, so I have some exposure to its meaning. I took it to mean, and I do so to this day, that I protect what the Constitution sets forth in its governing policy.

Rep. What’s Her Name needs to understand, too, what it means … but she ignores the obvious tenet of our nation’s government framework. It is that the Constitution establishes a secular government. It says in plain English in Article VI that there shall be “no religious test” required of anyone seeking public office.

The word “Christianity” is nowhere to be found in that document.

I know I have whipped this critter bloody already, but I will keep doing so until it sinks in. Christian nationalism seeks to turn the United States into a “Christian nation.” It isn’t. We are a nation with a population that comprises a strong majority of Christians as citizens. Our government was founded on Judeo-Christian principles and I am totally fine with that.

I am not fine with the notion that our Constitution somehow contains language that mandates our laws be faithful to New Testament scripture. So, for dipsh**s like Rep. What’s Her Name to suggest that it does reveals a remarkable level of ignorance about the very oath she took to uphold.