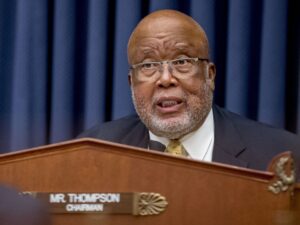 The select committee that House Speaker Nancy Pelosi chose to investigate the 1/6 assault on the U.S. Capitol is facing a deadline.

It needs to finish its work and present its findings prior to the start of the next Congress. Or else … the Republican leaders who might assume control of the chamber could pull the plug on the whole enterprise.

I say “might assume control” because a GOP takeover of the House isn’t as much of a lead-pipe cinch as it was, oh, six months ago.

However, Committee Chairman Bennie Thompson cannot even begin to presume that Democrats are going to maintain control of the House of Representatives. If I were the chairman, I would be making damn sure the panel’s work gets done a whole lot sooner than later.

Thompson has indicated that the committee is going to resume taking public testimony on Sept. 28. There is a damn near certainty to be more fireworks ignited in the hearing room after the chairman gavels the proceedings to order.

But looking forward it will be imperative for the committee to present its complete findings prior to the new Congress taking its seat. It then can submit those findings to the Justice Department — which already is conducting its independent probe.

What causes me great alarm is the revenge rhetoric coming from the likes of House GOP leader Kevin McCarthy, who has made no secret of his desire to protect Donald Trump’s ample rear end if given the chance.

Make no mistake that McCarthy has been a profile in cowardice as it relates to the insurrection that Trump incited that day on The Ellipse. McCarthy once said the right thing in blaming Trump for causing the attack, only to take it all back and resume his role as legislative suck-up to the 45th POTUS.

I hope Chairman Thompson is on the same page cited in this blog post. He needs to get the work done and then hope Democrats can hold on to reins of power in the House.