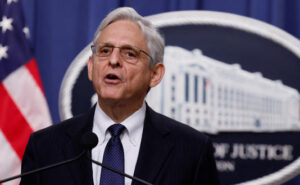 Merrick Garland’s stock keeps appreciating, in my humble view, as he weathers the storm of criticism being heaped on him by the far-right wing of the political horde that awaits some finality in what the U.S. attorney general determines regarding Donald J. Trump.

We have at least one nutjob member of Congress filing impeachment papers against Garland. Why? Because he ordered the search of Trump’s Florida home for classified papers the ex-president squirreled away … illegally!

Right-wing media hounds keep referring to the search as a “raid,” implying that the FBI agents pounced on the former president’s home, behind his back. Good grief! Garland performed this act by the book. It was legal and totally constitutional.

He is defending the agents and others within the Justice Department who have come under fire by the right-wingers who — were they investigating a Democratic former president — would be the darlings of the conservative media.

And I was struck by a particular phrase he used in defending the agents and other DOJ staffers. He declared his pride in “working alongside them.” Think of that for just a moment. There was no self-aggrandizement in that statement, no sense of “they work for me, therefore I am better than they are.” No. He stands shoulder to shoulder with the men and women he calls “patriotic public servants.”

Garland is a stellar public servant himself. I am glad he’s on the job. I also am grateful that President Biden persuaded this top-notch legal mind to stand firm in the face of criticism he had to know was coming his way.