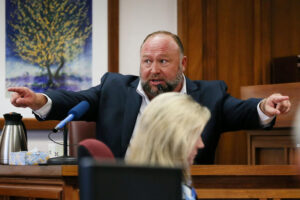 A Texas jury has done the right thing by assessing a hefty punitive damage award against one of the nation’s most noted and infamous purveyors of hate and outright falsehoods.

Alex Jones will have to pay the families of children slaughtered in the December 2012 Sandy Hook Elementary School massacre $44.5 million. The jury awarded that amount in assessing the punitive damages that Jones must shell out.

Of course, Jones claims to be impoverished.

Jones already was found guilty of defamation by declaring that the massacre of those kids in Newtown, Conn., was fake, that it never happened, that it was a staged event designed to gin up opposition to the gun owners’ rights lobby.

This individual is a disgrace to the human race. The jury decided, moreover, to make him pay for the damage he did to the loved ones of those precious children and the educators who sought to protect them against the madman.

What might be the fallout from this award? It is my sincere hope that this jury’s decision to hammer a known hate monger might deter someone else out there who is inclined to spew the kind of filth that comes from the mouth of Alex Jones.

I know all about the First Amendment’s guarantee of free speech. Gasbags such as Jones use the U.S. Constitution as their first and last line of defense against who seek to muzzle them. The truth, though, is that I don’t want them necessarily silenced simply because they espouse views I find reprehensible. I believe it is important to keep such idiots in plain sight where we all can keep our eyes on them.

However, the jury ruled that Alex Jones took several giant steps too far by defaming the families of innocent victims.

Now he has been ordered to pay for the garbage he has blathered and the damage he has inflicted.