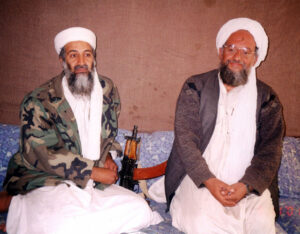 However, as of today, the two terrorists share an important trait. They both are dead! Al-Zawahiri is just as dead as bin Laden.

The news today marks a significant victory for U.S. intelligence officials who located al-Zawahiri in Afghanistan and then launched a drone strike to take the bad guy out.

I want to make an important point that, yes, is going to remind readers of this blog about a pledge that President Biden made a year ago when he announced the sudden withdrawal of U.S. troops from Afghanistan.

He told us that the United States would not relent in its hunt for international terrorists, even as we removed our troops from the battlefield in Afghanistan.

Ayman al-Zawahiri happened to be bin Laden’s successor as the leader of al-Qaeda, the monstrous terrorist organization that carried out the 9/11 attack on our nation and dragged us into a global war against those who would seek to do us harm.

President Barack Obama ordered the SEAL team strike that killed bin Laden in May 2011. It was a huge moment of victory for this nation’s war on terror. Many of us cautioned, though, in real time that someone would emerge to take bin Laden’s place.

That someone proved to be al-Zawahiri.

Now a new president, Joe Biden, gave the OK to launch a drone aircraft into Afghanistan, where it killed al-Zawahiri.

Does this mean the end of al-Qaeda? Hardly. We can expect another hideous animal to take the reins of the terror network.

All of this also illustrates what many of us have said since the immediate aftermath of 9/11, which is that we are likely entering an endless conflict against the forces of evil.

“The strike that killed al-Qaeda leader Ayman al-Zawahiri is a major success of U.S. counter-terrorism efforts. A result of countless hours of intelligence collection over many years,” said Mick Mulroy, a former Pentagon official and retired CIA paramilitary operations officer. “The message for all al-Qaeda and its affiliates should be that the U.S. will never relent in its mission to hold those accountable who would seek to harm the United States and its people.“