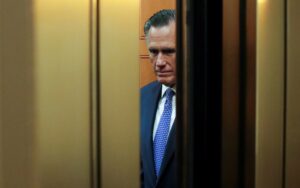 I never thought this day would come, when members of the Republican Party – those who have swilled the snake oil peddled by a fraud – would turn on one of the party’s truest believers and use his name as a cudgel to beat their opponents bloody.

They would call them “Mitt Romney Republicans.”

Believe this or not, but the Donald Trump cultists are now using Sen. Mitt Romney’s name as an epithet. Yeah, that Mitt Romney, the junior senator from Utah, the 2012 GOP nominee for president who came quite close to defeating President Obama, the fellow who saved the 2002 Winter Olympics in Salt Lake City and the son of a successful governor of Michigan.

How in the world did Mitt earn the title of becoming a four-letter word in today’s GOP politics?

He voted to convict Donald Trump during the two impeachment trials that Trump faced during his term in office. That’s it! He sided with the rule of law on both occasions. He delivered an impassioned and emotional floor speech in the Senate prior to announcing his decision to vote to convict Trump during the initial impeachment trial, which came after the House impeached Trump for soliciting a political favor from the president of Ukraine in that so-called “perfect phone call.”

All of this speaks so badly of a once-great political party, that its rabid followers of the ex-Narcissist in Chief would stoop so low as to label a one-time ideal Republican politician a pariah and a man worthy of political scorn among his fellow conservatives.

Hey, I didn’t vote for Sen. Romney when he ran against President Obama in 2012. However, my respect for him only has grown as he has remained loyal – along with a few of his GOP congressional colleagues – to the oath they took when they began their terms. It was an oath to protect the Constitution and to follow the law.

What in the name of fealty to the founders’ intent is wrong with that? Someone has to explain it to me.