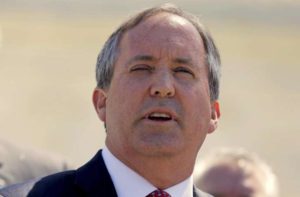 Ken Paxton always evokes a response from me whenever I see his name in the news.

It goes like this: How in the world does this guy manage to get elected and re-elected as Texas attorney general despite (a) being under indictment for securities fraud, (b) subjected to criticism from whistleblowers who allege he is corrupt as hell and (c) fights to fend off a Texas Bar Association lawsuit that seeks to disbar him from the practice of law?

Paxton, a Republican, is fighting a State Bar lawsuit alleging that the legal profession’s governing body is biased against him. Hey, the clown sought to overturn the 2020 presidential election with a lawsuit that got tossed immediately into the crapper by the U.S. Supreme Court.

The justices ruled that Paxton had no legal standing to sue to have another state toss out legally cast ballots for president.

That’s the basis for the State Bar’s lawsuit. It seems to this layman we have an issue with basic legal competence.

As for the indictment, that came down from a Collin County grand jury in 2015, right after Paxton took office. He has been stalling and fighting the start of his trial ever since. They still don’t have a trial date set.

Oh, and seven of his top legal assistants quit in 2020, citing complaints against Paxton that he had an inappropriate relationship with one of his big campaign donors. The legal eagles have accused Paxton of bribery. The FBI is conducting an investigation.

Good grief! This clown has been sullied and soiled ever since he took office. The State Bar of Texas is just the latest example of the kind of legal trouble our state’s top lawyer has been facing.

So, I circle back to my question: How in the world does this moron manage to get elected? He is running this year for his third term as AG. I hate thinking that Texas voters really are so stupid to keep electing a crook for attorney general.