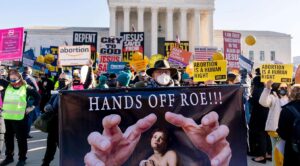 Leave it to a lame-duck U.S. Supreme Court justice to put a monumental ruling in fascinating perspective.

Stephen Breyer is about to retire from the nation’s top court. He cast a dissenting vote in the decision to toss aside 50 years of “settled law” by overturning Roe v. Wade, the landmark 1973 decision that made abortion legal.

Previous Supreme Court decisions had upheld Roe v. Wade in earlier challenges. The court would rule that the law was established and that, by golly, the Constitution did guarantee a woman’s right to terminate a pregnancy.

Not this court. Not this time.

It was Justice Breyer who noted in his dissent that Roe had withstood challenges because it remained the same. The only thing that changed, he wrote, “is this court.”

So it is that Supreme Court, with his conservative supermajority, has decided to enact an activist agenda by ruling that a half-century of “settled law” had been decided wrongly.