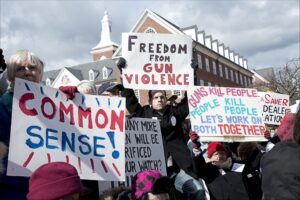 For as long as I have been studying politics and government — which predates my college years in the 1970s — I have accepted a fundamental truth about effective governance.

No one should expect to get everything they want or require, that compromise is an essential part of what I call “good government.”

Thus, the legislation on gun reform that has won U.S. Senate endorsements from both sides of the great divide, while not perfect, is as good as we can expect to get from the current, sharply divided legislative body.

I am particularly intrigued by Republican opposition to the bill from the likes of Ted Cruz of Texas, from those who contend that it does too much, that it is too restrictive of Second Amendment rights to keep and bear arms. On the other side we hear yammering from progressives that the legislation doesn’t go far enough, that it should contain provisions banning assault weapons and should increase the minimum age of those who want to purchase a firearm.

There once was a time when I was a young ideologue who wanted legislators to see everything my way. Then I got older and, presumably, a bit wiser about how the real world functions.

I have a wish list of items I want to see enacted in legislation that seeks to reduce gun violence. The “red flag law” contained in the current bill is a good start; so are background checks for younger purchasers of firearms. I can live with it and I want it all to become law.

It has been many decades since Congress has gotten off its a** and done something, anything, to deal with this gun violence crisis.

Thus, I will endorse what Senate negotiators have pieced together. I pray it’s just a start. That they hammered this deal out gives me hope.