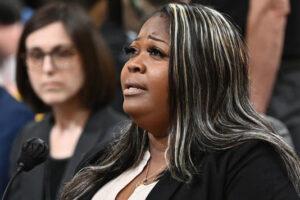 These congressional hearings are getting juicier and seem to be tightening the noose around Donald J. Trump’s proverbial neck.

We heard from two Georgia election officials about how Trump sought to bully them into “finding” enough votes to steal the election from Joe Biden. We also heard from a Georgia secretary of state who also wondered out loud how The Donald could brazenly seek to break the law.

These all are Republicans, who were ostensibly Trump supporters until the former POTUS decided to seek to overturn the results of the 2020 presidential election.

The most gut-wrenching testimony, though, came from two Georgia election workers who had their reputations dragged through the mud. Trump and his lawyer, Rudolf Giuliani, singled out two women by name as seeking to dump illegal ballots.

The women told of the threats against their lives. According to Yahoo News: In a hearing before the House select panel investigating the events that led to the Capitol riot, Wandrea “Shaye” Moss, an election worker in Fulton County, testified that false claims made by the former president, his personal lawyer and their allies about her and her mother, “Lady” Ruby Freeman, a temporary election worker, “turned my world upside down.”

It’s important to understand something about these two women: They are not public officials. They are volunteer poll workers who dedicate their time to public service. Yet they became targets of The Donald and his thoroughly disgraced — and disgraceful — lawyer. They spoke blatant lies about these women who today told their side of the tragic story.

I am awaiting word now from Trump and how he’s going to spin the things he said about Shaye Moss and Ruby Freeman. He only will illustrate even more graphically his despicable nature.