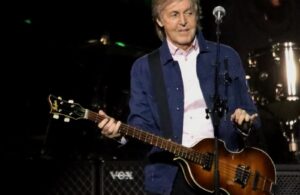 As a general rule I don’t use this blog to comment on public figures’ birthdays.

Today, though, I will make an exception and offer a brief salute to a musician who helped raise me, who helped guide my musical taste well into adulthood. I refer to the 80th birthday of Sir James Paul McCartney.

You know who he is. He comprised one-fourth of the world’s greatest band, The Beatles, along with the late John Lennon, the late George Harrison, and Sir Ringo Starr.

I have seen Sir Paul perform three times. First time was in 1965, in Portland, Ore., at the Memorial Coliseum; he played with his aforementioned bandmates. The second time was in 1993 at the Houston Astrodome, where he performed as a “solo” act with his band. The third time was in 2019 at Globe-Life Field in Arlington, Texas.

As I have noted many times over many years, the boy can still play. He can still rock ‘n roll with the best of ’em.

They say it’s your birthday, Sir Paul. Thanks for all you did to make me the man I am today.