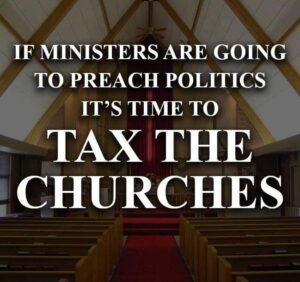 Here’s a thought I want to share: If religious organizations are going to bully public officials into following certain policy positions, then they need to be taxed liked any other business.

The San Francisco Catholic Archdiocese has declared its intention to deny House Speaker Nancy Pelosi — a devout Catholic — communion because of her pro-choice stance on abortion.

Pelosi’s position on abortion is well-known and has been reported on since before she became a member of Congress. The SF archdiocese, though, has sniffed out an opportunity to make some extra hay over the issue because of that draft Supreme Court opinion that suggests the court is set to overturn the Roe v. Wade abortion decision.

Speaker Pelosi shouldn’t be denied a sacred religious sacrament because of a public policy dispute she might have with the leaders of the church of which she has been a lifelong member.

I should point out, too, that members of Congress, as do virtually members of the federal government, take oaths of loyalty to the Constitution, not to the Bible or any other holy book. The last time I checked, which wasn’t long ago, I determined for the umpteenth time that the Constitution is a secular document.

The Church is treading on a slippery and dangerous slope by denying the speaker the opportunity to partake in holy communion.

But if the Church is allowed to get away with this kind of bullying, then there needs to be a serious debate and a decision on requiring religious organizations to share in the tax burden that falls on the rest of us.