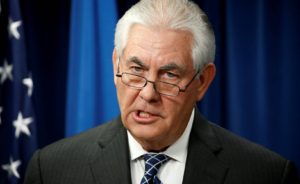 Of all the individuals from the Donald J. Trump administration who have fallen off the grid, one of them stands out to where I want to know what he must be thinking about the trouble that continues to swirl around the ex-POTUS.

Rex Tillerson. Perhaps you recall he was Trump’s initial secretary of state. Trump nominated the tough-talking Texan, the one-time Exxon-Mobil chief executive officer to lead our diplomatic corps. He didn’t last very long in the job, about 13 months.

He called Trump a “fu**ing moron,” never denied saying it and then got canned via Twitter message that Trump fired off.

Tillerson wasn’t an effective secretary of state, to be sure. How could he be, given that he reported to a numbskull who undercut him at every turn?

And, yes, he was right about the moronic status of the then-POTUS.

What in the world is this fellow thinking these days as we watch the 1/6 committee zero in on Trump, his key aides and the events that led to the insurrection against the government?

He probably doesn’t wish to be thrust back under the glare of the political spotlight. Some of us, though, want to hear what’s on his mind and in his heart.

Are you out there, Rex?