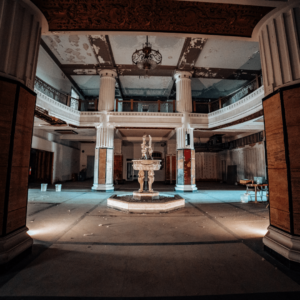 I keep hearing the rumbles from up yonder on the Texas Caprock about a landmark structure in downtown Amarillo.

It’s the Herring Hotel building. I need to add the term “building” because it hasn’t been an actual hotel since the 1970s. It has been rotting for decades.

Along comes a firm that is trying to market it to investors. One of my spies in Amarillo tells me the firm specializes in historic hotel structures. It is working, my snitch tells me, on the Le Meridian in Fort Worth. The theme of whatever happens to the Herring will be to honor the heritage of the region.

OK. Let’s see. That would be cattle, railroads, oil and natural gas exploration. Let’s throw in medical research and development, along with nuclear weapon assembly and disassembly, and — oh, yes! — with aircraft manufacturing and assembly.

The Herring used to be the place to see and to be seen. It was the site of extravagant parties and was a gathering place for the rich, famous and those who aspired to be, um, rich and famous. These days it’s a place where homeless people seek shelter from the frigid Panhandle winter.

I want life to return to the Herring. The city has turned several important corners in its efforts to revive its downtown district. It has restored old buildings (turning two of them into hotels), built a baseball park, welcomed a glitzy new hotel near City Hall.

I am not going to predict that the Herring site is going to turn into shiny new jewel that towers over the north end of Amarillo’s downtown district. However, the rumbling just won’t stop. It leads me hope there’s something to what I suspect might be about to occur.