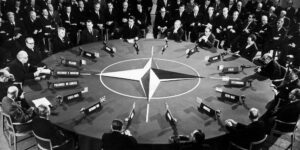 It is impossible to overstate the diplomatic victory that President Biden has scored as he seeks to get Russia to stand down in its military invasion of Ukraine.

The victory involves the unanimous support for Ukraine by the North Atlantic Treaty Organization, which leads me to hope — if not yet believe — that Russian goon Vladimir Putin will resist launching an attack on any of the NATO nations that border Ukraine.

NATO has this document called Article V, which declares that an attack on a single NATO nation is an attack on all of them. It reminds me of the warning President Kennedy issued in October 1962 when the USSR was erecting missile launch sites in Cuba; JFK told the Soviet leadership that an attack against any nation in the Western Hemisphere would bring a “full retaliatory response” from the United States.

President Biden has made essentially the same declaration, as has NATO, which is that the organization formed to protect Western Europe against the Soviet threat would respond collectively if the  Russians attacked any NATO state.

Think of where U.S.-NATO relations have gone since the Donald Trump administration. Trump castigated NATO over whether European members were paying their fair share of the cost. Yes, many of the nations have stepped up their financial load, but they did not trust the U.S. president to be there if a crisis exploded.

President Biden has helped restore that trust and in the process well might have acquired some leverage to keep the Russians from committing an act of utter foolishness.