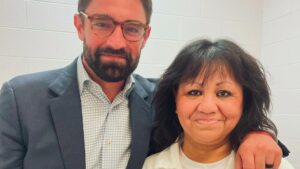 I cannot overstate the significance of the support that a woman condemned to die in Texas prison execution chamber is receiving from both sides of the great political divide in this state.

Melissa Lucio has received a stay of execution from the Texas Court of Criminal Appeals. She was slated to die on Thursday for the death of her 2-year-old daughter 15 years ago.

I believe she deserves a new trial, given all the doubt about her conviction and the allegation that the state withheld evidence from her defense team.

What continues to amaze me is the support she is getting from tough-on-crime conservatives in the Legislature, led by Plano Republican state Rep. Jeff Leach, who had the honor of telling Lucio this week about the CCA decision to forestall her execution. Lucio’s reaction was to sob uncontrollably.

Leach is a former member of the ultra-conservative Texas Freedom Caucus; he resigned from the caucus a while ago, citing some issues with the hardline positions it was taking. He still is a conservative, but he appears to be a man with an actual heart.

I applaud the leadership he is taking in fighting for Melissa Lucio.

I happen to oppose capital punishment, but you likely know that already. I also oppose the partisan divide that too often splits politicians along party lines even when the issue compels them to seek common ground.

One of those issues is seeking justice for a prison inmate who might have been convicted wrongly.