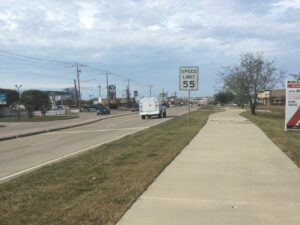 Who is Mike Robertson? He once served on the Princeton City Council and once told me he wanted the Texas Department of Transportation to slow the traffic along U.S. 380 to mph from both ends of the highway route through the city.

Then he decided against seeking re-election to the City Council. He was gone from City Hall.

My concern rests now with the issue he raised. I visited with Robertson a little more than a year ago for a story I wrote for KETR-FM public radio at Texas A&M-Commerce. Robertson spoke of the varying posted speed limits along U.S. 380, how motorists could drive 55 mph as they drove past Princeton High School, but then have to slow to 45 mph as they moved into the middle of the city.

Robertson said he intended to lobby TxDOT — which manages the highway — to reduce the speed limit to 40 mph along U.S. 380’s entire right-of-way through Princeton. I presume he would have allowed the city to post 35 mph limits in front of the high school during certain times of the day, when students are going to school and going home from school.

Robertson’s time on the council has ended. I believe, though, that the issue — and the concerns — he raised are as legit now as they were when he first raised them.

One thought on “What happened to speed issue on 380?”