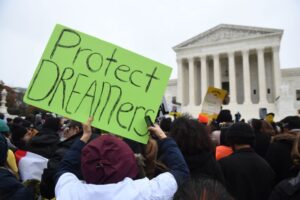 Sakshi Mohta’s story saddens me terribly, as it speaks to a fundamental flaw in our nation’s inability to help people like her assimilate more completely into the country where she came of age.

Mohta dreams of becoming a physician. Mohta attends the University of Texas-Dallas. The student wrote an essay for the Dallas Morning News that laments being “aged out” of the nation’s immigration system, putting her in position to face possible deportation.

Yes, she entered this country legally as an 8-year-old when her parents moved here.

The nation’s immigration system is broken. It needs repair. It needs to be made more efficient and it needs to enable immigrants such as Mohta to be able to achieve either permanent resident status or enables them to fast-track their way to U.S. citizenship.

I came to America legally. Our broken immigration system is sending me away (dallasnews.com)

Her essay began with these words: Most people my age look forward to their 21st birthday — a night of celebrating your long-awaited adulthood with friends. But in February, I approached that milestone with a sense of dread. My birthday marked the day I “aged out” of my immigration status. Overnight, I went from being the legal dependent of my parents to a deportation risk. A snag in immigration policy landed me here. That snag is a serious one, impacting 200,000 other “documented Dreamers” like me. Congress can fix this problem. For the benefit of America, it should.

Ah, yes. Sakshi Mohta is a Dreamer, one of those U.S. residents who are caught in a system that doesn’t know what to do with them once they reach a certain age.

Mohta wants the system reformed. So do I. So do many other Americans who want our nation to continue to serve as a beacon to those who come here in search of greater opportunity.

Mohta has at least one important friend in the Senate. Mohta wrote: Texas Sen. John Cornyn gave his verbal commitment to support policy change, but words are not enough. We need action.

By all means, we most certainly do need the people in power to lend credence to their words of support.