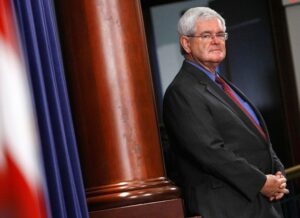 Donald Trump gets blamed for a lot of what is wrong about today’s political climate and I take a back seat to no one in expressing my loathing for the man and what he brought to the table when he entered political life in the summer of 2015.

However, I want to give the former A**hole in Chief a pass on something that’s been kicked around since his arrival on the political stage, which is that he introduced this era of intensely bitter feeling.

The actual bogeyman, in my view, happens to be the Republicans who ran for Congress on that Contract With America platform cobbled together by a back-bench House of Representative member by the name of Newt Gingrich.

Gingrich called the cadence to which the GOP insurgents marched. Gingrich infamously declared that he wanted Republican officeholders and candidates for public office to label “Democrats as the enemy of normal Americans.”

They did. You know what? That message worked with Americans who had grown angry with “politics as usual.” The Republicans took control of Congress after the 1994 midterm election and Gingrich got chosen by the GOP caucus as speaker of the House, where he continued his anti-other-party bombast.

The anger carried over into the 2000 election cycle and the balloting that resulted in George W. Bush being elected by the slimmest margin possible.

Donald Trump, therefore, inherited a climate already tilled and planted with all manner of antipathy. But it was Newt Gingrich who sowed the ground with a form of nastiness that enabled Trump to take it to the next level and perhaps even to the level after that.

Those of us who are old enough to remember how the major parties were able to work together for the common good likely want a return to the “good old days.”