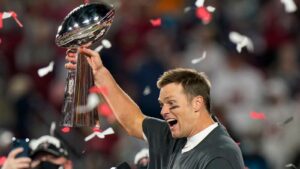 Most of us who follow football — even a little bit — understand that it is a game of numbers. You know, yards gained, yards lost, interceptions, tackles, penalty yards, sacks, punting yardage. Whatever …

Tom Brady reportedly is retiring after 22 seasons of professional football becoming arguably the greatest quarterback of all time.

I want to focus on a particular number as we ponder the effect this guy had on the game he played with excellence and precision.

The number is 198. What does that number signify?

It is the number players selected ahead of Brady in the NFL draft of 2000. Now think for a moment if you’re a general manager who had the chance to select this young man what you might have thought after he won all those Super Bowls and led the New England Patriots and the Tampa Bay Buccaneers to all that glory.

One hundred ninety-eight players got into the NFL ahead of the GOAT. Granted, not every team drafting in that sequence needed a quarterback. Still, Tom Brady quite unexpectedly became the gold standard for winning in the National Football League.

The Patriots drafted him out of the University of Michigan even though they had a decent QB calling signals for them. Drew Bledsoe then got hurt; Brady replaced him on the field. And the rest, as they, is history.

I know, we had that “Deflategate” matter involving the footballs that were allegedly tampered with by the Patriots, giving Brady some sort of advantage over his foes. Phooey.

Now, let’s look at some other numbers.

The guy was a stellar athlete. He possesses an incomparable work and dietetic regimen that has allowed him to play the game at a high level until the very end of his playing days. He led the NFL in passing yards at the age of 44, for crying out loud.

Perhaps, in my mind, the greatest measure of this guy’s greatness can be found in this episode. He left the Patriots after the 2019 season and joined the Buccaneers. The Patriots, who had won six Super Bowls with Brady at QB, missed the playoffs that year; the Bucs went on to win the Big Game, beating the defending champs, the Kansas City Chiefs.

Yep. This guy is the greatest of all time.