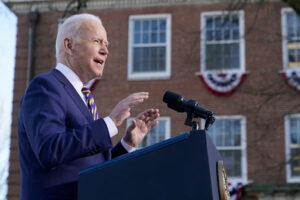 Listen up, Joe Biden haters. The president is down, to be sure. Do not, though, start ringing the death knell over the presidency of the man who fought for more than 30 years to attain the highest office in the land.

I acknowledge fully that President Biden has endured a rough first year. Let me remind everyone of a couple of recent historical events.

Ronald Reagan took office in 1981 and also had a bad first year. Yes, he was shot and nearly killed three months into the presidency. Then the Republican Party got drubbed in the 1982 midterm election. President Reagan, though, got re-elected in 1984 in a smashing 49-state landslide. That’s one.

Bill Clinton became president in 1993. He, too, suffered a rough first year. Republicans seized control of Congress in 1994. Ah, but then President Clinton cruised to re-election in 1996. That’s two.

Barack Obama assumed office in 2009. He set out to pass the Affordable Care Act; Congress obliged. Then Democrats got what Obama described as a “shellacking” in the 2010 midterm election. President Obama then went on to win re-election in 2012.

I know we have had plenty of one-term presidents who never got it together. George H.W. Bush fell from a 90% approval rating to losing his re-election effort in 1992; Jimmy Carter endured inflation and a general feeling of disgust and lost in a landslide to Ronald Reagan in 1980; Donald Trump … well, you know what happened there.

President Biden is only in the “first quarter” of a long game, writes Paul Brandus in USA Today. There’s a way out of the morass, Brandus writes: The president’s biggest mistake has surprised me. He hasn’t spent enough time talking up last year’s economic achievements. “America’s economy improved more in Joe Biden’s first 12 months than any president during the past 50 years,” Bloomberg reported last month, “notwithstanding the contrary media narrative contributing to dour public opinion.”

Joe Biden has had a rocky year in office. But, folks, this is only the first quarter. (yahoo.com)

And so it might go moving ahead into the next year and the year after that. We still have that pandemic. It still is making people sick. We keep hearing that the end is in sight. Maybe. We hope.

I am going to stand with the president as he keeps fighting for the country.