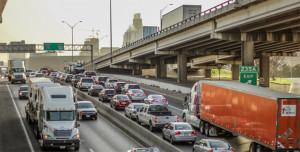 I made a trek Tuesday morning from my home in Collin County to downtown Dallas.

Along the way I was struck by a couple of thoughts.

One was that, “Dang, it’s nice to drive along the Central Expressway during morning rush hour and not have to slow down.” Previous trips along U.S. 75 from Princeton to the heart of Big D would last as long as 90 minutes; the trip includes plenty of serious slowdowns and occasional traffic stoppages. I made this particular trek in less than an hour.

OK, I get that it was just the second workday between Christmas and New Year’s Eve, which means a lot of traffic was, shall we say, elsewhere. School is out. Kids are with Grandma and Grandpa, along with their parents.

The second thought was whether it is a precursor for what might lie ahead if businesses have to shut down — again! — in response to the COVID-19 pandemic.

We’re in the midst of another spike in infections from the Omicron variant. The first business shutdown in early 2021 was no picnic for businesses that had to close their doors and keep employees at home. It was a picnic, though, for those who had to travel through the Metroplex during that time.

Our highway network often is choked with traffic during rush hours — morning and evening. I relished the drive this week. I don’t expect to relish it very much in the future.