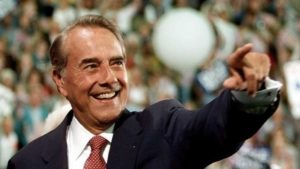 I am gratified to read the tributes that are pouring in from both sides of the great divide in Washington to honor the life and service of a genuine American hero.

Indeed, “hero” is a word we are hearing in the wake of Robert Dole’s death today at age 98.

Dole was a longtime Republican Senate stalwart, a man who knew how to work across the aisle. He built friendships that transcended whatever political differences he had with his colleagues.

To hear Democratic politicians praise Dole’s service to the country, starting with his combat service during World War II, gives me hope that we might be able someday to bridge the chasm that has turned mere political opponents into enemies.

Our current lawmakers can take a page from the example that former Sen. Bob Dole set during his long, productive and profoundly distinguished life.