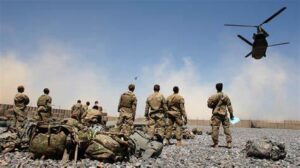 Maggie Hassan and Joni Ernst are providing proof that U.S. senators from opposing political parties can work toward a common goal.

Hassan, a New Hampshire Democrat, and Ernst, an Iowa Republican (who also served in combat in Afghanistan), have teamed up to push toward construction of a new memorial on the D.C. Mall to honor the men and women who fought and sacrificed during our nation’s longest war.

I applaud their effort and hope that the new memorial can be built sooner rather than later.

There once was a time when I thought the Mall had enough memorials on it. Then the Afghan War came to an end earlier this year when President Biden ordered our troops off the battlefield. The fallout from that decision has been fierce. However, that does not diminish the need to honor the heroism displayed there for 20 years.

President Bush sent our troops into battle after 9/11. Then he expanded that fight into Iraq, which — candidly — was a mistake. However, more than 7,000 Americans died in the Iraq War.

The Mall already has a lot of memorials. The World War II, Korean War, Vietnam War memorials all are worth seeing. So is the MLK Jr. memorial, along with those built to honor Presidents Lincoln, Jefferson and Washington.

Our nation’s longest war produced plenty of heroism, sacrifice, tragedy and triumph. It needs to be memorialized on the National Mall.

Thank you, Sens. Ernst and Hassan, for pushing this issue forward.