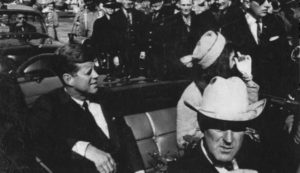 Many mainstream media observers have talked over the past couple of days while commemorating the 58th year since President Kennedy’s murder in Dallas about the right-wing conspiracy theories that permeate our politics to this day.

They have noted the John Birch Society’s brochures printed at the time of JFK’s visit to Dallas that accused the president of surrendering U.S. sovereignty to the United Nations, of appointing “anti-Christians” to government posts. It’s pretty standard right-wing wacko stuff.

Indeed, in the time leading up to the visit to Texas in 1963, there was considerable concern expressed by those close to the president about the perceived threats to him from the far-right wing of political thought.

However, let’s hold on and take a brief look at what happened on that day.

Who killed the president on that glorious Dallas day as he rode in the motorcade through downtown en route to the Dallas Trade Mart where he was to deliver a speech that afternoon?

The cops arrested a card-carrying Marxist named Lee Harvey Oswald. He was seen in the book depository building and captured later at the Texas Theater after he killed a Dallas police officer, J.D. Tippitt.

It seems, to me at least, that the authorities were looking the other way when this loser Oswald managed to change the course of world history with three rifle shots from the sixth floor of the Dallas office structure.

Why don’t the media talk about that tragic twist of fate?