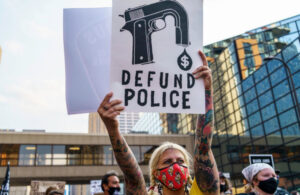 If an effort to “defund the police” can fail in a city such as Minneapolis, Minn., then where would any such effort succeed?

That is an situation facing progressive political groups and politicians as they ponder the results of this past week’s election in Minneapolis, the city that produced the horrifying image of the cop murdering George Floyd while making an arrest on an allegation that Floyd sought to pass a counterfeit $20 bill.

Indeed, writer Grace Curley says in an article published in the Spectator World, that the “defund the police” movement could be the death knell for Democrats everywhere.

A ballot measure voted on this week read in part, “Shall the Minneapolis City Charter be amended to remove the Police Department and replace it with a Department of Public Safety?” Voters rejected Question 2 handedly, with 56.17 percent of residents voting no on the amendment.

The results should have sent a shockwave across the cocktail parties of the liberal bourgeois in DC, many of whom proudly shout about defunding the police from the rooftops of their fancy apartment buildings. How could an uber-progressive dream like this fail to gain support from voters — especially in a liberal city of all places?! If this Squad-stamped idea failed in Minneapolis, where, if anywhere, could it succeed?

The term “defund” is what has caught the attention of everyone. To “defund” something implies you take money away from it. Defunding police departments, therefore, suggests one does not want to pay to have cops patrolling the streets, arresting bad guys/gals and keeping us safe from those who would do us harm.

I don’t doubt that many officers have acted badly. They are overwhelmingly outnumbered by decent men and women who take their oaths to protect and serve seriously.

I hope the progressive movement can step away from the defund the cops notion. It’s a loser at the ballot box. It’s also a loser on our city streets.