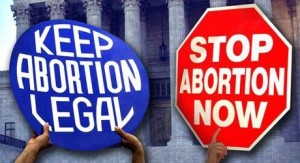 There’s no denying the fact that abortion as a political issue gives me serious angst that borders on heartburn.

The U.S. Supreme Court eventually is set to rule on whether Texas highly restrictive anti-abortion law passes constitutional muster. The smart money says the court, with its 6 to 3 conservative majority, is likely to say that the state can ban abortions at any period after the sixth week of pregnancy.

I believe the court would make a grievous mistake if that’s the ruling it delivers.

Does that make me “pro-abortion?” No. Let me rephrase that: Hell no. It doesn’t nothing of the sort. I consider myself to be pro-life. Why? Because I cannot — and never would — counsel a woman to get an abortion were she to ask for my counsel on that matter. Nor can I sanction government to mandate that a woman cannot make that choice herself after counseling with her partner, her faith leader, her deity, her conscience.

That decision is a woman’s alone! Period. End of discussion.

The court well could rule that the 1973 Roe v. Wade landmark decision — another case emanating out of Texas — is no longer “the law of the land,” or is “settled law.” Earlier SCOTUS decisions have upheld Roe v. Wade. This one well could upset that legal precedent.

It would be a mistake.