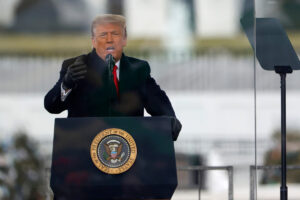 There is no “executive privilege” available to the former POTUS as he fights to prevent a House select committee from issuing subpoenas for key aides in its hunt for the truth behind the 1/6 insurrection.

The former POTUS said this, according to The Hill: “We will fight the Subpoenas on Executive Privilege and other grounds, for the good of our Country, while we wait to find out whether or not Subpoenas will be sent out to Antifa and BLM for the death and destruction they have caused in tearing apart our Democrat-run cities throughout America,” the former president said in a statement.

You see, there is no executive privilege for former POTUSes.

The House of Representatives formed a select committee to root out the cause and effect of the insurrection that erupted on 1/6. It also intends to seek recommendations on how to prevent attacks from recurring. I wish the panel well in that search.

As for the former Insurrectionist in Chief, he is whistling in the wind if he thinks he can find a way to prevent the likes of former White House chief of staff Mark Meadows and former chief strategist Steve Bannon from testifying before the House committee.

President Biden said as well that he won’t allow such executive privilege requests to be processed through the White House.

The former president incited the riotous mob to storm Capitol Hill on 1/6. Its intent was to disrupt the certification of the Electoral College result of the 2020 election that chose Biden over his predecessor. It failed, but the riot managed to inflict grievous damage to our democratic process.

So the House select committee’s work will require members of the former POTUS’s administration to stand before it, take an oath to tell the truth and then to divulge what they knew and when they knew it. The former president’s effort to prevent that from occurring is doomed to fail … as it should.