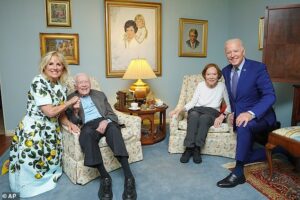 Hey, I swear I remember Meghan McCain — the former “The View” co-host who’s taken on a new gig as a columnist for a British newspaper — saying how she “loves” President Biden and would be hard-pressed to say anything negative about him.

Now she writes in The Daily Mail that Joe Biden is on track to be a “worse” president than Jimmy Carter.

MEGHAN McCAIN: Joe Biden is shaping up to be a worse president than Jimmy Carter  | Daily Mail Online

McCain is the daughter, let’s recall, of the late U.S. Sen. John McCain, one of Joe Biden’s best friends in the Senate. McCain was a Republican; Biden is a Democrat. Their friendship was forged shortly after McCain joined a Senate staff as a military adviser to a committee on which Biden served.

Now the young woman who said she “loves” the president has turned on him, calling him feckless, unreliable and cantankerous.

Look, she’s entitled to change her mind about politicians, even those who hold occupy a special place in her heart. I am just waiting, though, for an explanation from Meghan McCain on the dramatic change in her feelings toward the president of the United States.

As for President Biden being “worse” than President Carter, I need to remind McCain that Jimmy Carter did manage to negotiate a peace deal between Israel and Egypt … which has held firm and solid through thick and thin.

So, let’s stop with the Carter-bashing. Hmmm?